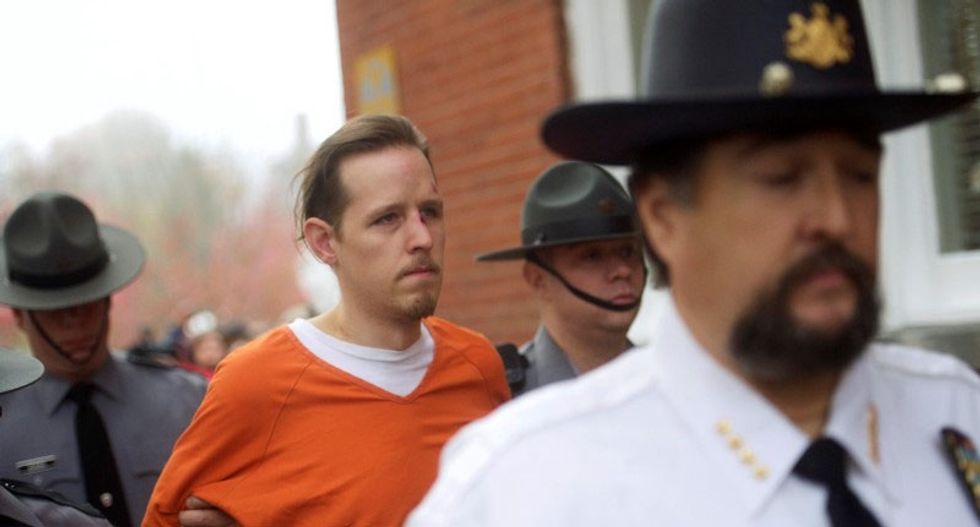 A survivalist charged with shooting two Pennsylvania state troopers, one of them fatally, who then eluded a 48-day manhunt by hiding in the woods told police after his capture that he ambushed the men because he "wanted to make a change" in government and "wake people up."

The apparent motive behind Eric Frein's sniper attack outside the Blooming Grove barracks during a late-night shift change on Sept. 12 surfaced in court papers filed on Thursday in which prosecutors added two counts of terrorism to the criminal complaint against him.

The new charges accuse Frein, 31, of killing Corporal Bryon Dickson, 38, and wounding Trooper Alex Douglass, 31, with the purpose of influencing the policy of government.

Frein, who had been on the Federal Bureau of Investigation's most-wanted list, has been held without bail on first-degree murder and related charges since his capture by U.S. marshals at an abandoned resort in the Pocono Mountains on Oct. 30.

The court papers also contain references to a letter that prosecutors say was written by Frein, 31, to his parents that lays out his views on the United States.

"Our nation is far from what it was and what it should be," the letter states, according to the court papers. "There is so much wrong and on so many levels only passing through the crucible of another revolution can get us back the liberties we once had."

Michael Weinstein, a public defender representing Frein, could not immediately be reached for comment, and has previously declined to discuss his client. Frein, who has not yet entered a plea, is due to appear in court for a preliminary hearing next month.

Ray Tonkin, Pike County's district attorney, has said he will ask that Frein be executed if convicted.

CNN.com noted Thursday that Sen. Ron Johnson (R-OH) put nominees to the Post Office Board of Governors on the spot demanding that they reveal if they've been pressured to fire DeJoy. Portman even asked the three nominees, Anton Hajjar, Amber McReynolds and Ron Stroman, the question before his colleague asked the same question.