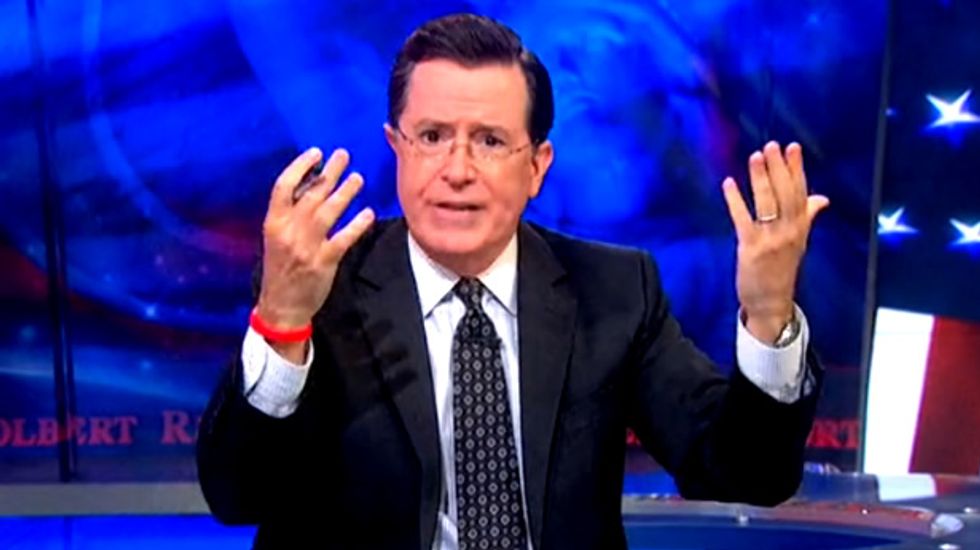 On last night's episode of The Colbert Report, Stephen Colbert lamented that his home state of South Carolina was forced to become the 33rd state in the union to recognize the legitimacy of same-sex marriages.

"A federal judge has ruled that South Carolina must recognize gay marriage?" Colbert began. "That is outrageous! When did South Carolina start recognizing the federal government?"

"Folks, as a native son of the Palmetto State, I am deeply disturbed," he continued. "This is the worst thing that's happened to South Carolina since someone found Mark Sanford."

"This ruling is a surrender to the gay agenda -- or as we call it, the War of Same-Sex Aggression."

"Next thing you know," Colbert said in front of a battle flag of the Confederacy, "the flag flying on our state capital will look like this," at which point the blue and red were replaced by pink and rainbows. "It's the stars-and-bars, not the stars-and-gay-bars."

"In all of this, there's one person I feel the most for," he said. "Me -- because South Carolina is where I traditionally married my female wife-woman, Lorraine. But years later, after all those years I spent with my beautiful bride, that seems like a total waste! Would I have gotten gay-married if I could at the time? Of course not. Did I have someone in mind? Who's asking? Was it Brad? Does he ever mention me?"

"So I, for one, will never forgive the judge who brought gay marriage to the state," Colbert concluded. "His name, Richard Gergel, will live in infamy. In fact, I would be shocked if, after this scandal, anyone in South Carolina ever named their child 'Dick Gergel' again."

Watch the entire segment from the November 13, 2014 episode of The Colbert Report below via Colbert Nation.