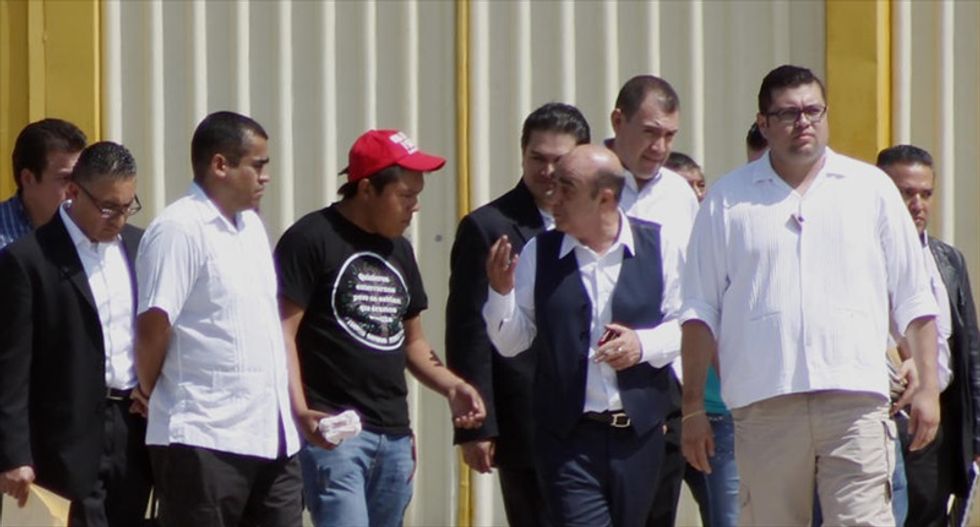 Relatives of 43 missing students leave at the end of a private meeting with Mexican Attorney General Jesus Murillo Karam (3rd-R) in Chilpancingo, Mexico on Nov. 7, 2014. Photo by Jesus Eduardo Guerrero for Agence France-Presse.

Suspected gang members in Mexico have confessed to killing more than 40 missing students and incinerating their remains in a case that has shocked the country, the attorney general said Friday.

But Attorney General Jesus Murillo Karam warned that it would be difficult to identify the charred remains and that authorities will continue to consider the students as missing until DNA tests confirm the identities.

Authorities have been searching for 43 students since police attacked their buses in the southern city of Iguala on Sept. 26, allegedly under orders of the mayor and his wife in violence that also left six people dead.

The three suspects said the students were killed after they were handed over to them between Iguala and the neighboring town of Cocula by police linked to the Guerreros Unidos drug gang, Murillo Karam said.

The bodies were set on fire with gasoline, tires, firewood and plastic in an inferno that lasted 14 hours, he said.

"The fire lasted from midnight to 2:00 pm the next day. The criminals could not handle the bodies (for three hours) due to the heat," he said.

The suspects then crushed the remains, stuffed them in bags and tossed them in a river.

The suspects were not sure how many students they received but one of them said there were more than 40.

Before the announcement, relatives of the missing said they would not accept that their children were killed until they get the results of independent Argentine forensic experts.