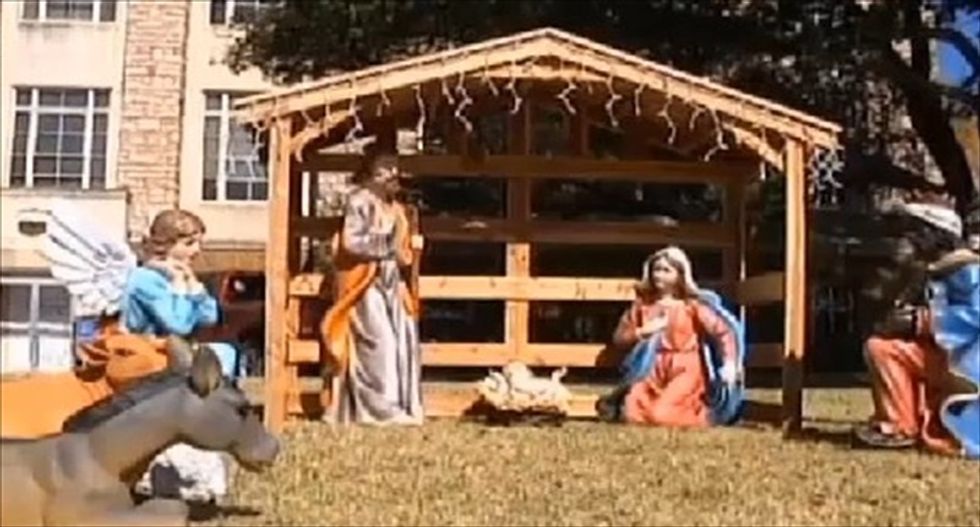 Officials in Cherokee County, Texas face a possible legal challenge from a national atheists' group after rejecting a local resident's request for a humanist display alongside a Christian Nativity scene, the Houston Press reported.

The American Humanist Association (AHA) told County Judge Chris Davis and the county commission in a letter on Monday that the display, mounted on the lawn of the county courthouse, "amounts to a monument to Christianity" in violation of the equal protection clause of the 14th Amendment, and demanded it be taken down.

"If they want a fight, then we'll have one," Davis told KTRE-TV. "We have other Christmas displays up around the courthouse and do other stuff on other holidays."

The AHA sent the letter on behalf of a local resident, Daniel Ross. Ross emailed Davis and the commission earlier this month saying that he felt the display excluded non-Christian residents. He then asked that he be allowed to put up signs commemorating "HumanLights," a secular holiday observed on Dec. 23, in the same location.

"HumanLight illuminates a positive, secular vision of a happy, just and peaceful future for our world, a future which people can build by working together, drawing on the best of our human capacities," Ross wrote. "Thank you for taking your time to read this and let me know what time frame would be best to have a sign up next to the manger."

"December 23rd is merely a date selected by your organization to make a political statement of your choice not to celebrate traditional Christian beliefs," Pinotti stated. "Perhaps you should consider choosing another time of the year to demonstrate your secular support instead of attempting to infiltrate the Christmas holiday with a singular purpose to destroy and denigrate the beliefs of others. Try to live and let live."

Davis told KTRE that the commisison had not met regarding the issue, but that he saw no problem with Pinotti expressing her personal opinion using her city government account.

But the AHA called it "constitutionally irrelevant" whether Pinotti was speaking for herself and not on behalf of the commission, citing her rejecting Ross' ideas because they do not honor "traditional Christian beliefs." The group also threatened to pursue a federal lawsuit if the Nativity display was not taken down.

Davis expressed confidence that the county would win a court battle, while suggesting that it would get support from state attorney general and governor-elect Greg Abbott (R), a religious conservative.

"The Attorney General's Office has backed the counties before on these cases, and I believe they will do the same again," Davis said. "I do not think there is a fight here."

Watch KTRE's report, as aired on Tuesday, below.