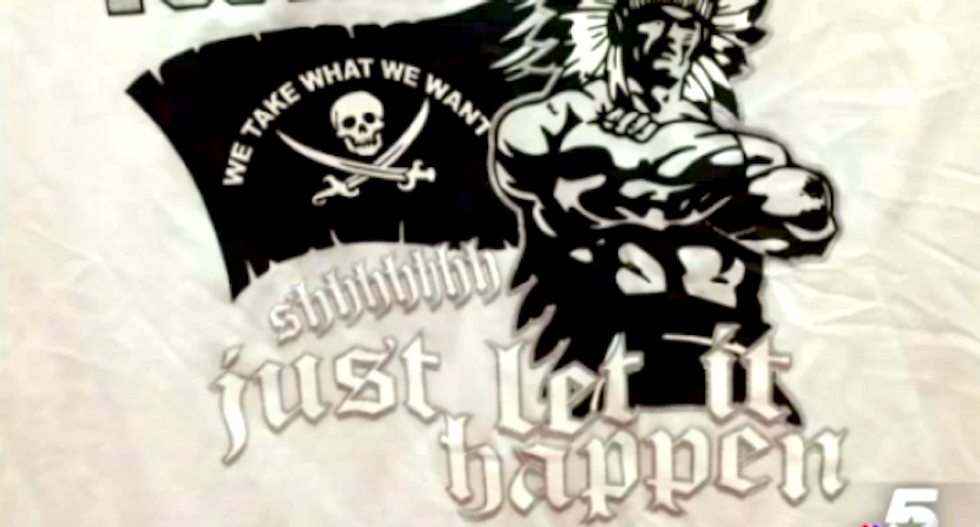 Supporters of a Texas high school football team are upset that players have been asked not to wear T-shirts that other students say appear to promote rape.

Supporters argue the T-shirts, which were handed out to 40 senior players in August, promotes the powerhouse team’s intention to take away the ball from opponents or prevent them from gaining yardage.

But the editorial written by opinion editor Sherilyn Morales said the shirts -- which show the team’s logo along with the phrase, “We take what we want” – could be perceived to have a dual meaning.

“The shirt’s main message is to state the player’s idea that there is no need for the opponent to put up a fight in letting our team take the ball away from them,” said the editorial, which was discussed by student editors and approved by a faculty advisor. “But can this saying be easily misunderstood? Yes. Though it certainly was not the goal of the shirt, its slogan connoted rape culture.”

A spokeswoman for the school district said administrators asked senior players not to wear the shirts after those concerns were raised, but the football coach and team boosters think that’s unfair.

“I’ve seen the shirts several times since July, and not once did it cross my mind that it was inappropriate,” said head coach Bob Wager.

He said Martin’s team is known for taking the ball away from opponents, and he said the controversial phrase referred to players doing their “talking on the field.”

The team’s booster club president said players, who create and hand out T-shirts each year to seniors, have used the phrase, “We take what we want,” for years to refer to beating other teams.

“It’s sickening to me that it was misconstrued,” said Ken White, president of the Martin booster club. “And it’s weird that it has been out for so long and just came up.”

The Warrior Post’s editor-in-chief said the staff decided to publish the editorial after a student approached a news staff member with her concerns over the shirt and its message.

"It's inappropriate, and it's not something that you want to represent Martin with,” said Jerred Osterman.

"Shh, just let it happen" is also an Internet meme, including "The Rape Sloth," and a video game producer taunted a female community manager from Microsoft with the phrase during a conference sponsored last year by the computer company.

Morales, the opinion editor, said student reaction to her editorial has been mixed.

“There were some that thought we were taking a personal hit on the football team,” Morales said.

“I have a wife, I have a daughter, I have a mother,” White said. “Our players have sisters and cousins. It’s unwarranted. Our kids deserve better, especially from our own school.”