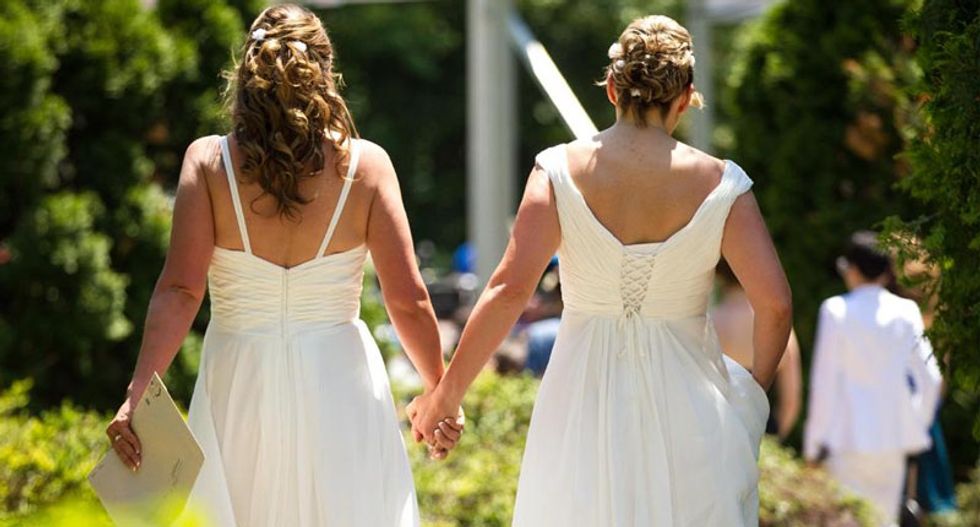 A federal appeals court Thursday allowed four states to prohibit same-sex unions, arguing that bans on same-sex marriage were rational because the government had a duty to regulate sex and its consequences.

In a 2-1 ruling (pdf), the U.S. Court of Appeals for the Sixth Circuit reversed district court rulings that had struck down same-sex marriage in Michigan, Ohio, Kentucky and Tennessee. The ruling means the Supreme Court is likely to take up the issue sooner rather than later.

The court's rational-basis review, however, is likely to raise some eyebrows.

In his ruling Judge Jeffrey Sutton wrote he was "hesitant to condemn as unconstitutionally irrational a view of marriage shared not long ago by every society in the world, shared by most, if not all, of our ancestors, and shared still today by a significant number of the States."

Bans on same-sex marriage rationally advance a legitimate government interest because sex between men and women needs to be regulated for society to function, Sutton argued in the ruling.

Lacking such regulations on sex could lead to social disaster, the court warned.

"May men and women follow their procreative urges wherever they take them? Who is responsible for the children that result? How many mates may an individual have? How does one decide which set of mates is responsible for which set of children? That we rarely think about these questions nowadays shows only how far we have come and how relatively stable our society is, not that States have no explanation for creating such rules in the first place."

"It is not society’s laws or for that matter any one religion’s laws, but nature’s laws (that men and women complement each other biologically), that created the policy imperative," the court explained.

Sutton acknowledged that same-sex couples are also capable of raising children and creating stable families. However, he claimed this fact does not undermine the rational basis of same-sex marriage bans.

Sutton also warned that a "love-and-commitment definition of marriage" would open the door to polygamy.

"The author of the majority opinion has drafted what would make an engrossing TED Talk or, possibly, an introductory lecture in Political Philosophy. But as an appellate court decision, it wholly fails to grapple with the relevant constitutional question in this appeal," she wrote.

Daughtrey also cast her scorn on Sutton's argument that the government has a duty to regulation sex and procreation.

"The principal thrust of the majority’s rational-basis analysis is basically a reiteration of the same tired argument that the proponents of same-sex-marriage bans have raised in litigation across the country," she wrote. "As previously noted, however, this argument is one that an eminent jurist has described as being 'so full of holes that it cannot be taken seriously.'"

'Metaverse': the next internet revolution?

Imagine a world where you could sit on the same couch as a friend who lives thousands of miles away, or conjure up a virtual version of your workplace while at the beach.

Welcome to the metaverse: a vision of the future that sounds fantastical, but which tech titans like Facebook founder Mark Zuckerberg are betting on as the next great leap in the evolution of the internet.