This Japanese body art will blow your mind 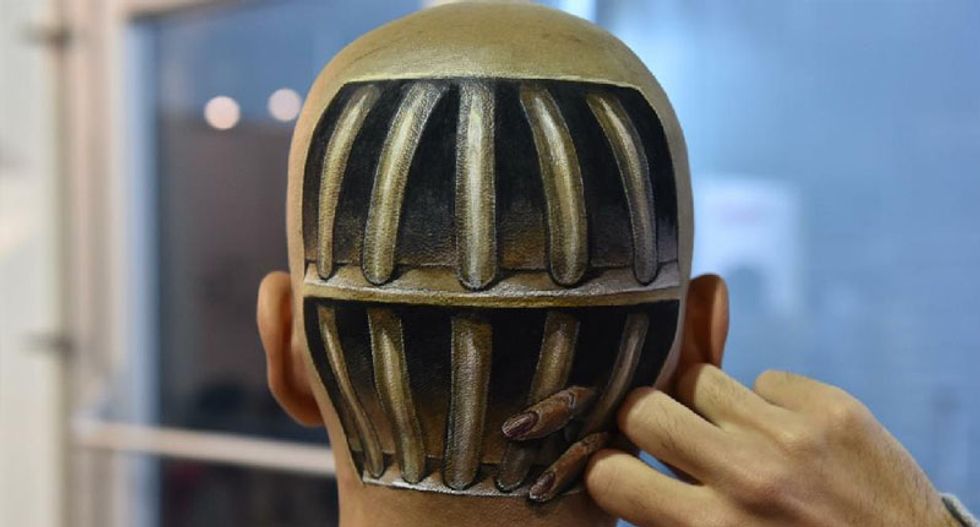 A talkshow host peering out of a man's stomach and a piece of skin peeling away from a hand to unveil tangerine segments beneath are two of the impossible visions offered by one Japanese body artist.

Hikaru Cho's brushes add a spare pair of eyes to one model and an ear to the back of someone else's hand as she works on art she says is short-lived but intended to reveal a new way to look at the human form.

"As soon as I finish, the work starts deteriorating as it begins to dry," said Tokyo-born Cho as she painted a hatch on a shaved head that reveals iron bars behind which a tortured figure languishes, desperate to escape.

The intense realism of the painting, part of Tokyo Designers' Week, would last only hours, destined to be washed off as soon as the canvas -- 20-year-old Ryonosuke Tanaka -- took a shower.

Cho, 21, was born to Chinese parents in Japan and burst onto Tokyo's art scene when she entered the city's Musashino Art University in 2012.

"I think of an illusion in three dimensions," she said. "I take in an element of trickery to make things appear hollowed out or to seem as if something is emerging."

The head painting -- as much a performance as a picture -- is someone literally "imprisoned by their thoughts", she said.

"This is something totally impossible in real life. I want viewers of my art to question what they usually think is normal," she said.

Her work, which can take up to seven hours, has previously included a huge zipper on a woman's back that is coming open to show the inner workings.

Cho's ultimate ambition is to paint an entire -- and naked -- body.

"Seventy percent of a human body is made of water, they say. I want to make that visible," she said.