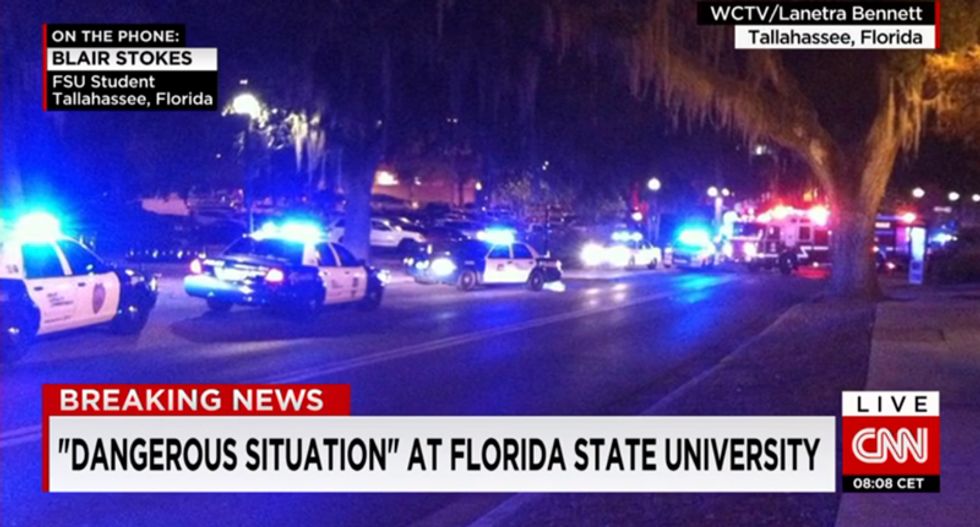 Three students were shot and wounded when a gunman opened fire inside a Florida university library early on Thursday, and campus police shot the suspect dead, officials said.

Officers confronted the attacker outside Florida State University's Strozier Library soon after midnight, ordered him to drop his weapon, then shot him when he fired on them, police said.

"This person for whatever reason produced a handgun and then began shooting students in the library," Florida State University Police Chief David Perry told reporters at a morning news conference.

Officers found three victims who had suffered gunshot wounds, Tallahassee Police spokesman David Northway said. One was treated on scene for a graze wound and was released, and two were taken to a local hospital.

A spokeswoman at Tallahassee Memorial HealthCare hospital said one victim was in critical condition, and the other was stable.

Florida State University Vice President for Student Affairs Mary Coburn said the three victims were students. Police estimated that the library was packed with between 300 and 400 students at the time, many studying for upcoming final exams.

Graduate student Alexandra Lauren told CNN that she was in the library at the time of the shooting.

"We heard the gunshots, and then it was in a matter of seconds the entire first floor just seemed to go into chaos," Lauren said, her voice wavering.

"It was very scary. I'm just more heartbroken than anything else. FSU means a lot to me," she added.

Further details on the identities of the shooter and the victims were not immediately released. Police said the gunman acted alone and no further threat was posed to the campus.

Florida State University hosts a student body of some 40,000 students and is one of the country's leading research institutions, according to its website. Classes at the school were canceled for Thursday, university officials said.

An investigation into the possible motive of the shooter was ongoing, police said.

"We are too frequently and too often waking up to incidences like this around the country," Tallahassee mayor-elect Andrew Gillum said at the news conference.

It was the latest in a series of shootings in schools and colleges that have prompted regular debates about gun control in the United States.

In September, a student at Indiana State University was arrested after shooting another student inside a residence hall. In June, a gunman armed with a shotgun opened fire at a small Christian college in Seattle, killing one person and wounding two others.

A 15-year-old gunman killed four other students in the cafeteria of a Seattle-area high school before turning the gun on himself last month.