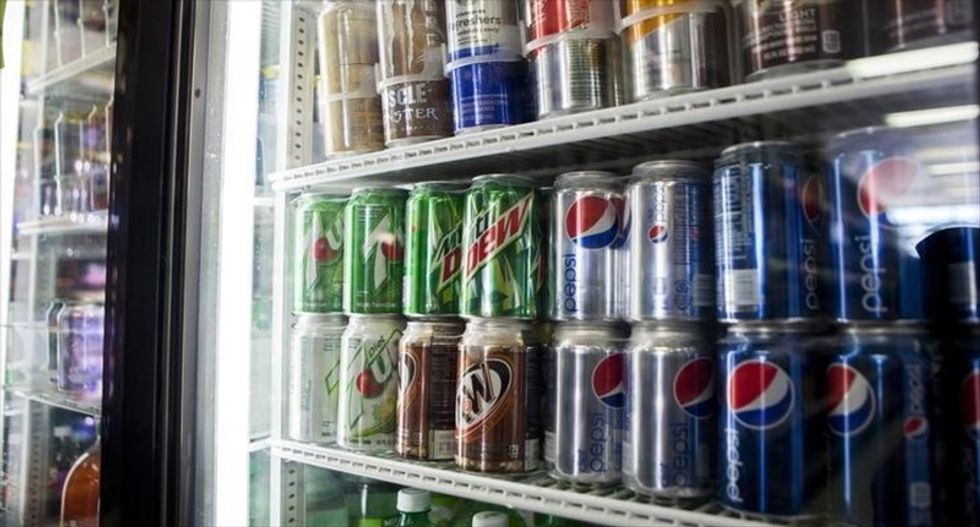 Cans of soda are displayed in a case at Kwik Stops Liquor in San Diego, California on Feb. 13, 2014. Photo by Sam Hodgson for Reuters.

No American city has passed a ballot measure raising taxes on sugary drinks, and ahead of votes Tuesday in Berkeley and San Francisco, the U.S. soda industry has been working hard to keep it that way.

In Berkeley alone, the American Beverage Association and its members have spent at least $2.1 million, or about $27 per eligible voter, to fight a ballot measure that would impose a new 1-cent per ounce tax on sugary beverages that supporters say would reduce consumption and battle obesity and diabetes.

In nearby San Francisco, the industry has spent $9 million, or about $19 per eligible voter, to beat back a 2-cent per ounce tax proposal on such beverages, which include soda and energy drinks, and would add 24 cents to the price of a typical drink.

The industry argues that the taxes unfairly single out one product category and would hit low income consumers the hardest.

The "No" camp has put up billboards and stuffed mailboxes in both cities with flyers. "Enough is enough!" declares one, calling the proposed San Francisco tax "regressive" and warning it would make living in one of the nation's most expensive cities even more difficult.

In Berkeley train stations industry billboards declare: "Watch out for loopholes" - a warning that the tax would apply to some drinks, but not other high-calorie products such as chocolate milk, alcoholic beverages or 100 percent juice drinks.

"What the soda industry is worried about is momentum, you win one and it makes it easier to win the next one and the next one," said Michael Roberts, executive director of the Resnick Program for Food Law & Policy at UCLA Law School.

So far, the $76 billion industry, which has been struggling with lackluster sales, has managed to stem the tide.

Since 2012, the industry has pushed back ballot measures in Telluride, Colorado, and in the California cities of El Monte and Richmond. In New York City, the state's high court this summer struck down the city's ban on super-sized sodas.

In Berkeley and San Francisco, the industry has outspent supporters 10 to 1. But while it is never easy to get voters tax themselves more, the taxes have a shot at passing, especially in Berkeley, a university town known for pioneering a ban on smoking in public places. The Berkeley measure needs a majority vote to pass, while in San Francisco, a two-thirds majority is needed. There have been no independent public polls on the ballot measures.

A representative of the association downplayed the significance of a possible setback in Berkeley.

"Berkeley doesn't look like mainstream America," said association spokesman Christopher Gindlesperger. "If politicians in the country want to stake their reputations on what Berkeley is doing, they will do so at their own risk."

The industry has been taking no chances in either city.

The beverage association collected money from member companies, including Coca-Cola Co and PepsiCo Inc, at least six months before proposed taxes were even on the ballots in July, according to its recent filing with California's election finance watchdog.

The association sent representatives to both cities in the summer and created outfits called the Coalition for an Affordable City and the No Berkeley Beverage Tax group to deliver the industry's message at rallies and other venues.

Some industry tactics have drawn fire. Berkeley Mayor Tom Bates, who supports the soda tax, said his constituents have complained that opponents conducted so-called push polls, a form of negative campaigning in which callers ask questions in the form of a survey with the aim of swaying the view of voters.

Critics also characterized the association's use of industry-funded groups, such as the Coalition for an Affordable City, as "astroturfing," a tactic that aims to hide the true sponsors of a message.

Association representatives said the group has been transparent about the industry's opposition to the measures.

Roger Salazar, a spokesman for the "No" campaigns, said industry did not conduct "push polls," and that any polling it conducted was for internal use.

While some three dozen states and the cities of Chicago and Washington, D.C., have implemented small, special taxes on sugary drinks sold in grocery stores and in vending machines, some economists and public health experts say the heavier levies proposed in Berkeley and San Francisco are more likely to curb sales.

That appears to have been the outcome in Mexico, where a soda tax went into effect earlier this year. PepsiCo last month said volume in Mexico declined 3 percent in the latest quarter, citing the tax hike.