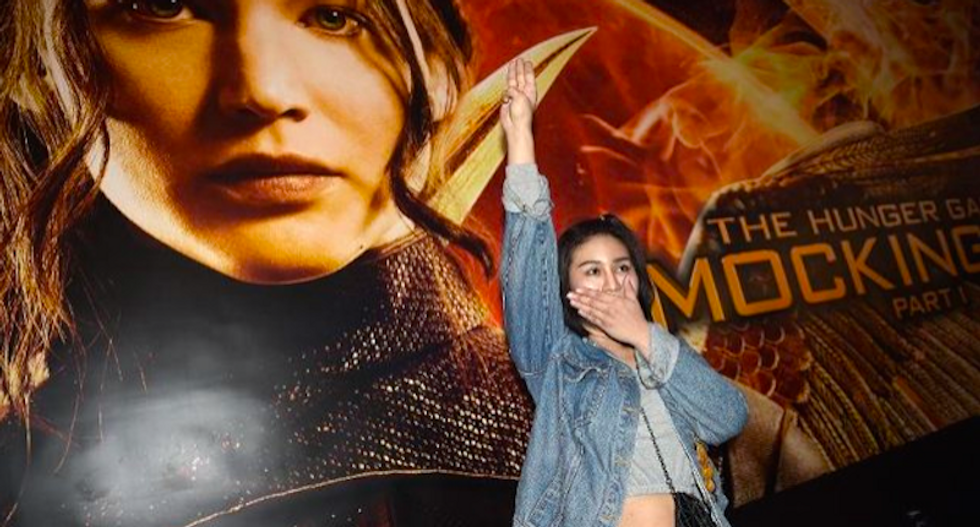 The salute has become the unofficial symbol of resistance against the army's May coup with scores detained for using it, including six students this week.

The same gesture is used in the fictional Hollywood blockbuster franchise by rebels fighting against a dictatorial regime.

General Prayut Chan-O-Cha, the prime minister, said he felt unthreatened by such protests but warned those caught using the gesture risked creating problems for themselves.

"I'm not concerned by the three-finger protest," the junta chief told reporters Friday. But he added ominously: "I don't know whether it is illegal or not but it could jeopardize their futures."

His comments came as the UN Human Rights Office for South-East Asia (OHCHR) criticized the authorities for a recent spate of instances where people were led away for questioning after making the salute.

"This case is the latest illustration of a worrying pattern of human rights violations, which has the effect of suppressing critical and independent voices," local OHCHR representative Matilda Bogner told AFP.

On Thursday a female university student was detained by plainclothes officers outside an upmarket mall in Bangkok for flashing the salute in front of a large publicity poster for the film.

A day earlier five students were briefly held by the military for flashing the three-finger sign during a speech by Prayut in the northeastern province of Khon Kaen.

All have since been released.

"I don't want to punish them (the students) so they were merely reprimanded, released and told not to do it again because it's of no benefit to anyone," Prayut said.

Some cinemas in Thailand have cancelled screenings of the film. Set in a dystopian future, it stars Jennifer Lawrence as the survivor of a bloody reality TV contest who goes on to become a rebel leader that topples a totalitarian state.

"I am not involved in that," Prayut said, adding he had seen some of the latest Hunger Games installment.

The military took power in May following months of political turmoil and street protests in the capital. A modicum of calm has since returned to the streets, but human rights groups say freedom of expression has been severely curtailed.

"Through martial law, the military not only put the lid on political opposition ... but on all forms of expression," author Wasant Techawongtham wrote.

"Public expression in violation of martial law has so far been peaceful. But if the steam cannot be let off in constructive ways, the state of peace will inevitably be broken," Wasant added.

The International Federation of Human Rights (FIDH) said 15 of the 20 individuals currently behind bars on charges of insulting Thailand's monarchy have been either detained or imprisoned since the May coup.

"Under the pretext of protecting the monarchy, the junta has embarked on a witch hunt that has significantly eroded fundamental human rights," FIDH President Karim Lahidji said.

The royal family is a highly sensitive topic in the politically turbulent kingdom where 86-year-old King Bhumibol Adulyadej, the world's longest reigning monarch, is revered as a demigod by many Thais.