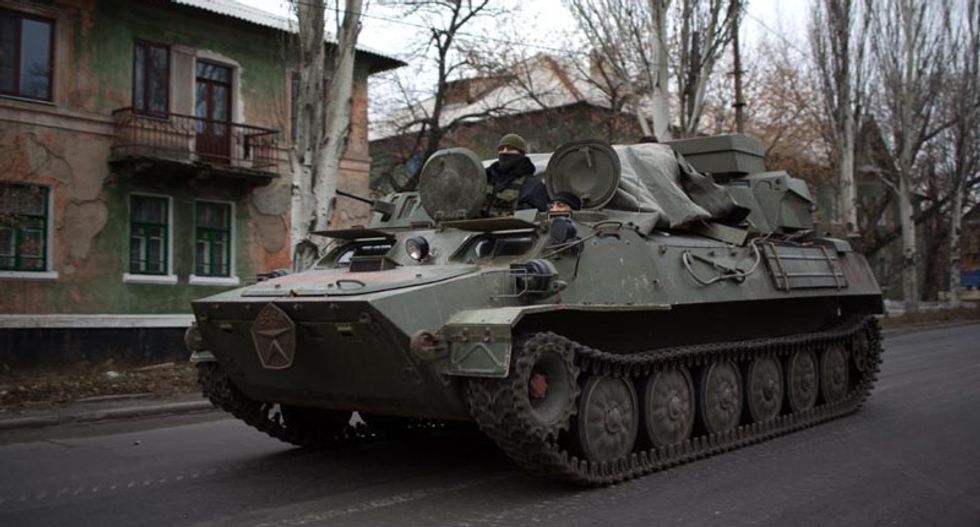 An amored personnel carrier (APC) rolls on November 12, 2014 on a main road in rebel-territory near the village of Torez, east of Donetsk (AFP Photo/Menahem Kahana)

Moscow denied the claims as "unfounded" and the deputy ambassador to the United Nations, Alexander Pankin, told an emergency Security Council meeting that the alliance was making "another foray into propaganda."

The United States warned it was ready to work with allies in Europe to slap more sanctions on Russia for supporting pro-Moscow separatists in east Ukraine, who have been battling Kiev since April.

"We do not have a good picture at this time of how many. We agree that there are multiple columns that we have seen," he added.

The claims come amid growing fears of a return to all-out conflict despite a two-month ceasefire which has stopped much frontline fighting but not shelling at strategic flashpoints.

"We are deeply concerned by the possibility of a return to full-scale fighting," UN Assistant Secretary-General Jens Anders Toyberg-Frandzen told the Security Council.

Ukraine's Defence Minister Stepan Poltorak said Kiev was preparing for a possible new round of fighting after seeing "increased activity" by Russia and pro-Moscow rebels in the east.

"The main task I see is to prepare for combat operations. We are doing this, we are readying our reserves," Poltorak said at the start of a cabinet meeting in Kiev.

Observers from the Organisation for Security and Cooperation in Europe (OSCE) reported seeing a convoy of 43 unmarked military trucks -- five towing Howitzer heavy artillery pieces and another five towing multi-launch rocket systems -- travelling into the rebel stronghold of Donetsk on Tuesday.

It was the latest in a string of recent sightings of unmarked trucks and heavy weapons heading towards the frontline in rebel-controlled areas.

Pro-Moscow separatists in east Ukraine have been fighting Kiev since April in a war that has left more than 4,000 dead and driven hundreds of thousands from their homes.

A peace agreement signed in Minsk in September has yet to take hold.

Russia "talks peace, but it keeps fueling war," US Ambassador to the United Nations Samantha Power told the council meeting.

Toyberg-Frandzen said the conflict "may simmer in this way for months with sporadic low-level battles" or could develop into a "frozen and protracted conflict that would (last) for years or even decades to come."

-US warns of more sanctions-

Washington insisted Ukraine had the right to defend its territory and warned that a new round of sanctions against Russia was in story.

"We and our allies and partners would be prepared to broaden and deeping existing sanctions," State Department spokeswoman Jen Psaki said.

Several hours of heavy artillery fire rocked Donetsk on Wednesday, the most intense fighting since the weekend.

The explosions of mortars being fired from near the city centre towards government positions at the ruined airport continued throughout the morning but had calmed down by early afternoon, an AFP correspondent said.

Ukraine's military said one soldier had been killed and five wounded as its positions came under repeated shelling around the region over the past 24 hours.

Government forces also accused the insurgents of trying to capture a strategic location along the volatile frontline, delineated as part of the ceasefire deal, north of the second-largest rebel stronghold Lugansk.

With fears rising of all-out war, Ukraine's central bank hiked interest rates Wednesday by 1.5% to 14% after inflation rose to nearly 20% last month, while the currency, the hryvnia, continued to tumble on money markets.

The Ukraine crisis has sent relations between Russia and the West plummeting to their lowest point since the Cold War.

Russian President Vladimir Putin is likely to face pressure at a G20 summit in Brisbane from Saturday.

Ukraine, supported by Western nations, accuses Russia of supplying pro-Kremlin separatists with the missile that shot down Malaysia Airlines flight MH17 over eastern Ukraine in July.

The disaster, which Moscow and the rebels blame on Ukrainian forces, killed all 298 people onboard, including 38 Australian citizens and residents.