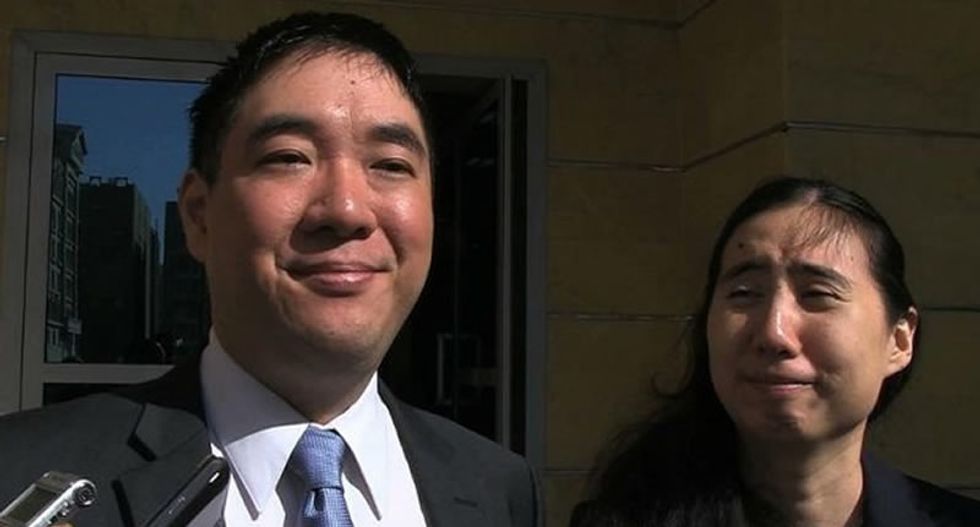 A Qatari appeals court on Sunday acquitted a US couple of parental neglect over their adopted daughter's death, but the couple said they were later prevented from leaving the country.

Matthew and Grace Huang were arrested in January 2013 after the death of eight-year-old Gloria, who had been adopted from an orphanage in Ghana.

The Huangs, who are of Asian descent, were initially accused of starving Gloria to death to sell her organs, but were later jailed for three years for parental neglect.

On Sunday the appeals court ruled them not guilty and said they were free to leave, based on witnesses' accounts that Gloria was "not neglected in leading a normal life".

"Grace and I want to go home and be reunited with our sons," said Matthew Huang, describing the judicial process in the Gulf state as "long and emotional".

"We have been unable to grieve our daughter's death but we want to thank the judge for today's decision," he told reporters outside the court.

"We're looking forward to returning to the US," he added.

Within hours of the ruling, the Huangs were at Doha airport and set to depart for the United States, an American embassy official said.

But according to an update on their Facebook page "Free Matt And Grace", they were told upon arrival at the airport that they were not allowed to leave the country.

The page also said Qatar's government had issued a warrant for their arrest earlier on Sunday and that their passports were taken from them at the airport.

AFP could not immediately confirm this from other sources.

At the appeals court hearing, the witnesses had testified that they saw Gloria eating one day before her death, the presiding judge said as he issued the verdict.

"This negates the charge that she was prevented from eating, a charge that the court of first instance used as a base for its initial ruling," the judge said.

The court also cited a statement by Gloria's brother Immanuel, who testified that the parents had provided food for their children.

A forensic pathologist told the court last month that Gloria's body showed signs that she had not eaten for days.

"I found no signs of food in her stomach and the whole intestine, and I found no other reasons for death," said the expert, Anees Mahmud.

The Huangs have insisted that Gloria died of an eating disorder rooted in a troubled early childhood.

They were released in November last year pending trial, but the court denied their request to leave Qatar so they could join their other two adopted children in the United States.

Adoption and multiracial families are rare in Qatar, a conservative Arab emirate, and the family's supporters maintain the Qatari authorities misunderstood the Huangs' situation.

The public prosecutor had pushed for the death penalty for the Huangs, who were initially accused of starving Gloria to sell her body parts.

Supporters of the Huangs had launched a campaign on social media to call for their freedom.

It says she had suffered from eating disorders which "likely were triggered by the extreme poverty she endured at an early age".

In addition to imprisonment, the lower court ordered the Huangs to pay a fine of 15,000 riyals ($4,100) each and to be deported after serving their sentence.

Matthew Huang last month criticised the court as a "sham", saying the couple felt as though they had been "kidnapped and trapped".

The Huangs moved to Qatar in 2012 for Matthew, an engineer, to work on infrastructure projects linked to the 2022 football World Cup.

Their supporters describe them as a loving family and say they have collected supporting testimony from people who knew them in Qatar, which the authorities declined to accept.