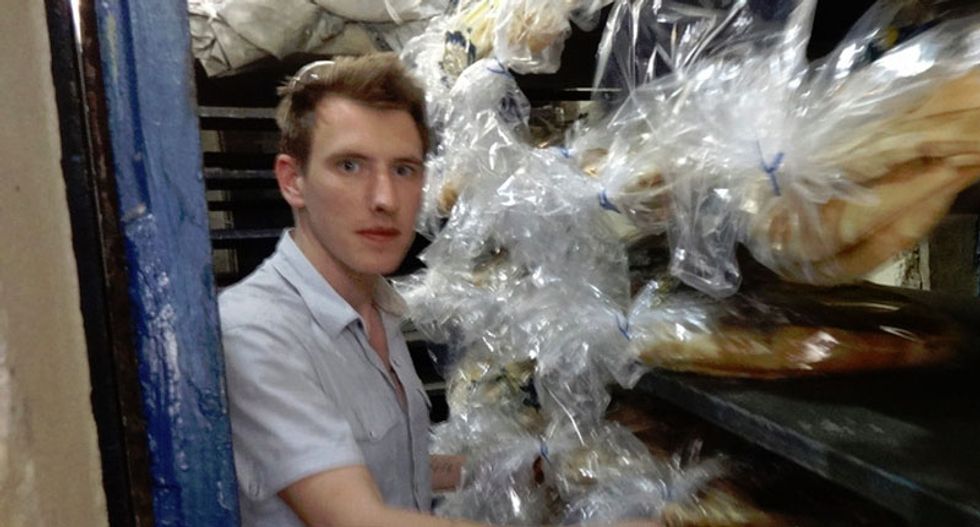 Abdul-Rahman (Peter) Kassig is pictured collecting bread for a delivery to refugee populations in this undated handout photo obtained by Reuters November 16, 2014. REUTERS/Kassig Family/Handout via Reuters

Peter Kassig, the U.S. aid worker beheaded by Islamic State militants who captured him in Syria last year, was remembered on Sunday for his courageous devotion to helping people whose lives were upended by civil war.

The parents of the 26-year-old medic and former U.S. Army Ranger, who pleaded in a video message to his captors last month to spare their son's life, said they were heartbroken.

"We know he found his home amongst the Syrian people, and he hurt when they were hurting," said Ed and Paula Kassig of Indianapolis. "We are incredibly proud of our son for living his life according to his humanitarian calling."

U.S. President Barack Obama confirmed the Indiana native's death after militants claimed the killing on Sunday in a video posted online showing a masked man standing above a decapitated head. Kassig was the fifth Western hostage killed by Islamic State.

Obama and Kassig's parents referred to the relief worker as Abdul-Rahman, the name he took on converting to Islam after being taken hostage. According to his family, he was detained on Oct. 1, 2013, as he traveled for an aid project in an ambulance headed to the eastern Syrian city of Deir al-Zor.

Kassig, who briefly served in Iraq in 2007 during a stint in the U.S. Army, returned to the Middle East in 2012 for a spring break trip while studying political science at Butler University in Indianapolis, his family said.

Moved by the suffering of Syrian refugees displaced by war, Kassig took a leave of absence from college and relocated to Lebanon to volunteer at a hospital as an emergency medical technician.

In September 2012, he founded Special Emergency Relief and Assistance to provide food and medical supplies to refugees and first aid training to civilians in Syria.

Mourners lauded Kassig as selfless and inspiring. "His murder is a loss for all of us," Nick Schwellenbach, an American who met Kassig when both studied Arabic in Beirut in 2012, said in an email to Reuters. "His big heart and his outreached hand made a difference in the midst of the cruelty of war."

In a letter to his parents, parts of which they released last month, Kassig said he knew his captivity might not end well.

"If I do die, I figure that at least you and I can seek refuge and comfort in knowing that I went out as a result of trying to alleviate suffering and helping those in need," he wrote.