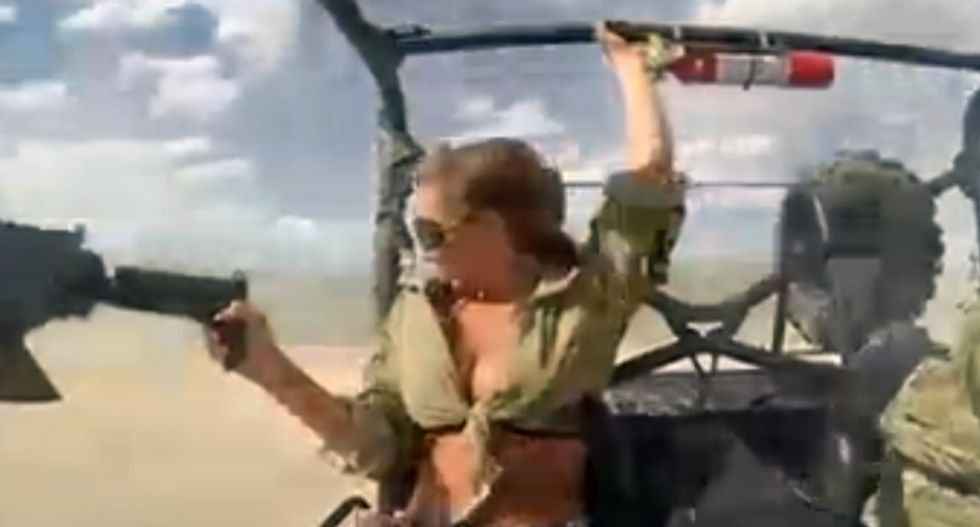 (Reuters) - The Utah National Guard is forcing an officer into early retirement for his involvement in a video featuring bikini-clad models riding in a tank, and three other service members face lesser discipline, a guard spokesman said on Saturday.

The non-commissioned officer allowed part of the video, which surfaced on the Internet last month, to be produced at Camp Williams in the Salt Lake Valley, said National Guard spokesman Lieutenant Colonel Steve Fairbourn.

At one point in the video, a promotion for a calendar shoot, models in camouflage bikinis climb into a tank, with one saying in a British accent "Come in my ride?"

The photos are set to appear in the 2015 "Hot Shots Calendar," produced by a company of the same name, with a percentage of proceeds going toward wounded British and American veterans, according to its website.

The Utah National Guard, expressing concern about its equipment being improperly used in the video and photo shoot, launched an investigation soon after it came to light, and Fairbourn said the investigation concluded on Friday.

"Managing federal and state dollars is important to us, we want to be good stewards of it," he said.

The non-commissioned officer with the guard's 19th Special Forces unit will receive a letter of reprimand and be forced into early retirement, Fairbourn said. He served in the wars in Iraq and Afghanistan and received the Purple Heart medal for being wounded in battle, he said.

"He's a great American and he made a mistake, and he's going to be held accountable for it," Fairbourn said.

The other three members of the guard will receive varying levels of discipline, from a reprimand to counseling, based on how involved they were in the production, he said. The guard did not release the names of the four service members.

The Utah National Guard found a Paladin tank was improperly used in the shoot, along with an armored vehicle, a Humvee, a military ambulance and a special forces boat, he said.

Meanwhile, the Utah Department of Public Safety has found two of its officers participated in the video, which showed the models firing some weapons from the agency. One officer was on-duty and the other was off, department spokesman Captain Doug McCleve said last month.

Most if not all of the ammunition was provided by a shooting range east of the Great Salt Lake, McCleve said.