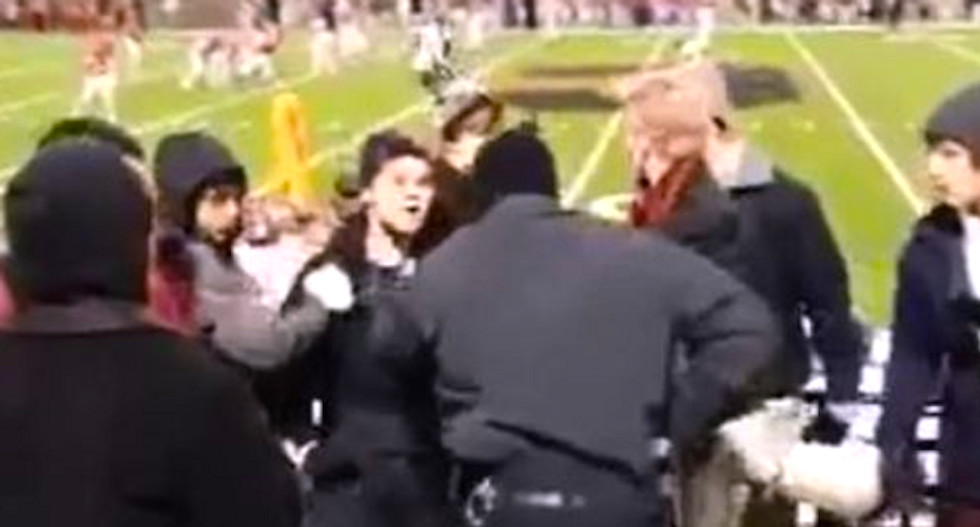 An Alabama teen claims a police officer shoved, detained, and sprayed chemical irritant into his face Friday during an unprovoked attack at a high school football game.

Cameron Rader said the officer had confronted some other teens standing near a railing and then stared down the teen and his friends, reported the Montgomery Advertiser.

The officer told the group he wasn’t “a cop you can mess with,” and Rader said he started laughing “because it was crazy.”

That angered the officer, the teen said, who then accused the boy of pushing him – although Rader said he was facing away from the officer and talking to a girl at the time.

Video of the incident, which was filmed by another Prattville High School student in the stands, shows the officer shove the much smaller Rader back through the crowd and against a rail in the grandstand.

The teen tries to escape the officer’s grasp, saying later that the officer had grabbed his throat.

The officer shoves Rader again and sprays the compliant teen directly in the face with chemical irritant.

"I was telling him to get his hands off me, to stop touching me, and then I asked what I did," Rader told the newspaper. "You can see that on the video. I have my hands by my side. I'm being compliant and he keeps pushing me. That's when he maces me. I couldn't breathe. It was in my throat and nose and the fumes were burning my eyes -- and it hurt for a long time."

The officer dragged him outside the stadium, where he told other officers the boy had “nudged him.”

Police did not respond to requests for comment, and Rader and his parents have hired a pair of attorneys to ensure the incident is fully investigated.

The teen’s attorney said he believes the officer, whose name has not been released, possibly broke the law and violated Rader’s civil rights by detaining the boy.

Watch video of the incident posted online by the Montgomery Advertiser: