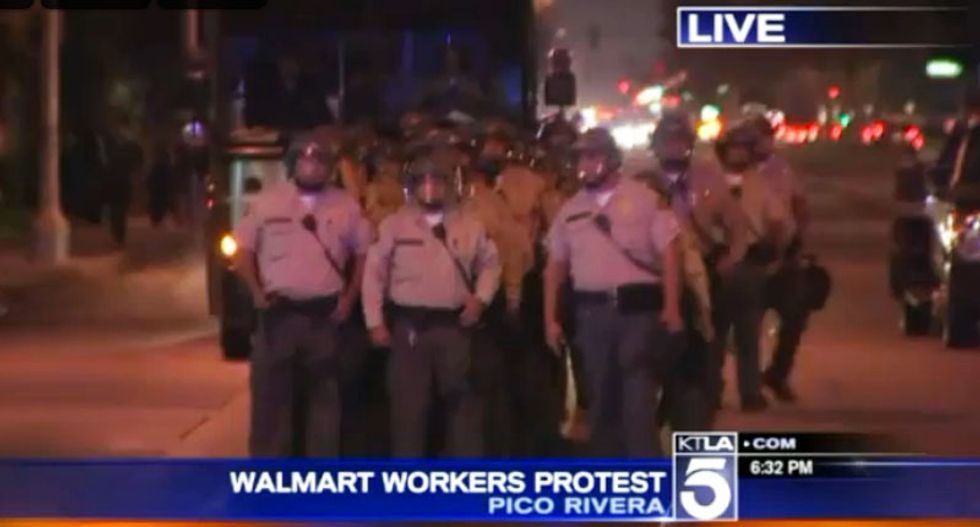 Police decked out in riot gear arrested Walmart workers and supporters after they blocked an intersection in front of a Pico Rivera, California store Thursday evening.

The sit-in followed a work stoppage  earlier in the day at the company’s Crenshaw Boulevard store in Baldwin Hills.

Employees in Baldwin Hills store stopped work and sat on the floor with tape over the mouths reading 'strike,' while holding signs saying, "Walmart stop the illegal threats."

Walmart is currently under investigation for firing and threatening  employee activists.

Activists have been setting up protests at Walmart stores across the country, posting pictures on twitter at #walmartstrikers.

In Pico Rivers, some workers sat in the middle of the busy intersection holding signs and lit candles as deputies pulled them to their feet and loaded them into buses.

One woman told a reporter she was willing to get arrested over of what she called “retaliation” against her fellow workers.

“We have a lot of associates who spoke up and were fired, and we need to stop it,” explained the woman who identified herself as Denise.

Asked why she was risking arrest she said, “I have two sons and it’s their future that I’m concerned about, mainly. Walmart is setting the trend for all companies. If we don’t change it now, the future of our youth is in dire straits.”