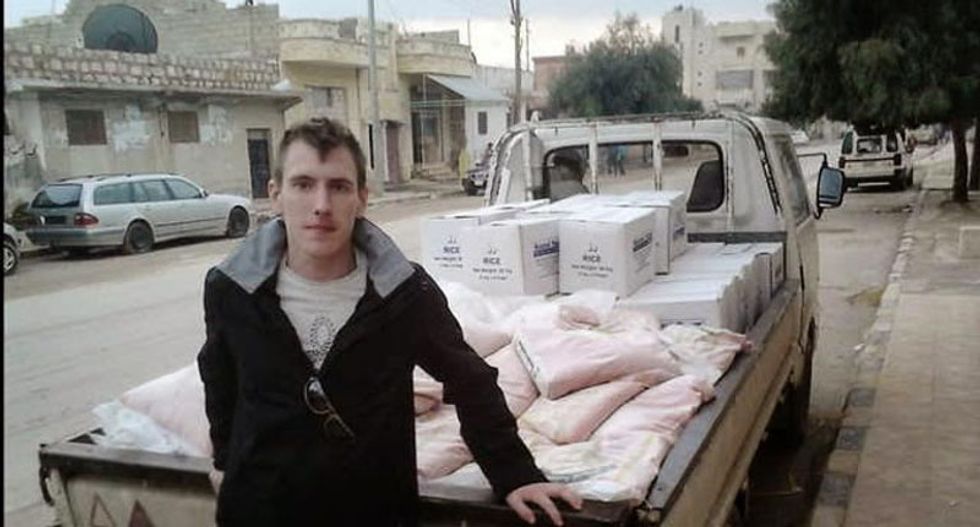 In this Kassig Family handout released on October 4, 2014, US aid worker Peter Kassig leans against a truck at an unknown location (AFP)

President Barack Obama confirmed Sunday the death of US aid worker Peter Kassig, calling his beheading at the hands of the Islamic State group "pure evil."

A video released by the militants showed the beheading of Kassig, who took the name Abdul-Rahman after converting to Islam, and that of 18 men described as Syrian military personnel.

The 26-year-old was captured last year and was threatened in an October 3 video showing the beheading of British aid worker Alan Henning.

"Abdul-Rahman was taken from us in an act of pure evil by a terrorist group that the world rightly associates with inhumanity," Obama said in a statement released by the White House aboard Air Force One as he flew back to the United States from an Asia tour.

"Like Jim Foley and Steven Sotloff before him, his life and deeds stand in stark contrast to everything that ISIL represents," Obama added, using another acronym by which IS is known.

Kassig founded an aid group through which he trained some 150 civilians to provide medical aid to people in Syria. His group also gave food, cooking supplies, clothing and medicine to the needy.

"While ISIL revels in the slaughter of innocents, including Muslims, and is bent only on sowing death and destruction, Abdul-Rahman was a humanitarian who worked to save the lives of Syrians injured and dispossessed by the Syrian conflict," Obama said.

"ISIL's actions represent no faith, least of all the Muslim faith which Abdul-Rahman adopted as his own."

He praised Kassig's work as "the selfless acts of an individual who cared deeply about the plight of the Syrian people."

The former US soldier was the fifth Western hostage killed by IS in recent months, after Sotloff and Foley -- both American journalists -- and two British aid workers were beheaded.

His killing came as Washington prepares to double its military personnel in Iraq to up to 3,100 as part of the international campaign it heads against IS.

Obama expressed confidence that "the indomitable spirit of goodness and perseverance that burned so brightly in Abdul-Rahman Kassig, and which binds humanity together, ultimately is the light that will prevail over the darkness of ISIL."

In the undated video, a man who appears to be the same British-accented militant who beheaded previous Western hostages stands above a severed head.

The British government has said it is looking into a newspaper report that the fighter, dubbed "Jihadi John," had been injured in a US-led air strike last week.