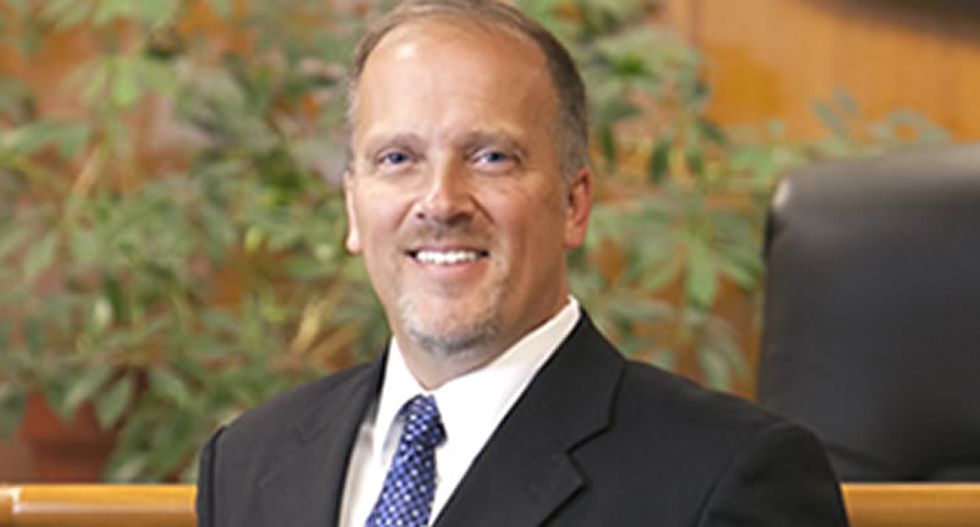 A judge declined to order the release of training videos that allegedly showed a Wisconsin Republican candidate making ethnic slurs and other offensive remarks.

Democrats say Brad Schimel, the GOP candidate for Wisconsin attorney general, made "offensive racial remarks and ethnic slurs, including but not limited to stereotyped accents, as well as sexist remarks" during a statewide prosecutors education conference.

Dane County Circuit Judge Richard Niess had ordered the videos, which were recorded in 2009 and 2013, released last week – ahead of Tuesday’s election – but the state Department of Justice appealed.

Niess reversed his own order and halted the release Monday, saying he didn’t think the contents of the recordings were "particularly earth-shaking."

The state Democratic Party asked the judge to restore his prior order, arguing the public had a strong interest in seeing the recordings with only one day left before the election.

The Democrats also argued the recordings should be released under the state’s open-records law.

"If the public does not have the opportunity to view these tapes by tomorrow, this case is mooted," argued Daniel Bach, the Democratic Party’s attorney.

The judge disagreed, saying the Department of Justice had the right to ask the state Court of Appeals to decide the issue.

The Democratic Party had requested all videos made at five sessions featuring Schimel, the Waukesha County district attorney, but the justice department claimed it could find only two.

Assistant Attorney General Anthony Russomanno argued that publicly releasing the video would reveal prosecutorial strategies that could be used by child sex predators and might reveal the identities of some victims.

The state also asked the court to consider the source of the request – Schimel’s political rivals.

The judge said he found “zero evidence” to support the state’s argument, but he reversed his order anyway.

The Democratic Party said participants in the training session revealed the contents of the recordings.

Schimel said last month that if he had been attorney general 60 years ago he would have defended Wisconsin’s ban on interracial marriage, arguing that the state’s top law enforcement officer should not put himself into discussions about whether or not a statute was right or wrong.

'He still has to deal with New York': AG Letitia James says Trump can't flee to Florida to avoid consequences

Attorney general Letitia James warned Donald Trump that he could leave New York but would still face consequences for his alleged crimes there.

The attorney general announced a $250 million criminal fraud lawsuit against the former president, his three eldest children, their family-owned business and other top company executives, but she said Trump's move to Florida would not allow him to get away with the years-long pattern of criminal behavior.

Speaking to the press on Wednesday, James said that Trump "blatantly ignored legal restrictions at Mar-a-Lago." She explained that the property of Mar-a-Lago was valued on the "false premise that it sat on unrestricted property and could be developed for residential use."

Attorney general Merrick Garland has pledged to uphold the rule of law in what sounds like a challenge to Donald Trump, and a recent speech signaled the former president's threats haven't intimidated him to change his mind.

The twice-impeached ex-president has made veiled and not-so-veiled threats of street violence erupting if he's indicted in one of the various criminal investigations targeting him and his family business, but Garland directly challenged those warnings in a speech over the weekend at Ellis Island, according to The Bulwark columnist Charlie Sykes.