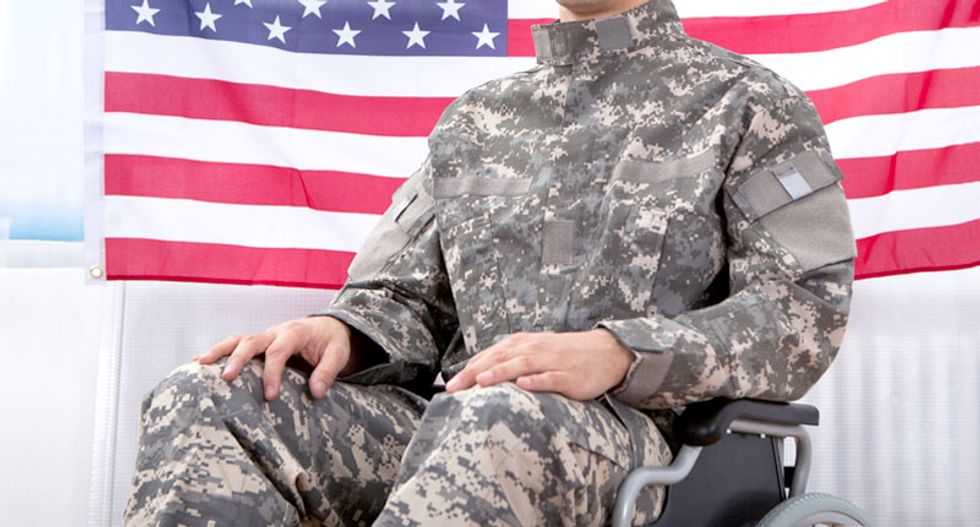 Wounded U.S. veterans and family members of U.S. soldiers killed in Iraq sued five European banks on Monday, seeking to hold them responsible for shootings and roadside bombings because they allegedly processed Iranian money that paid for the attacks.

The banks did not immediately respond to requests for comment.

The lawsuit was brought under the U.S. Anti-Terrorism Act, a 1992 law that permits victims to bring private suits against alleged financiers of militant operations.

Brought on behalf of more than 200 veterans and family members, the lawsuit alleges the banks conspired with Iranian banks to mask wire transactions in order to evade U.S. sanctions. The Iranian banks then funneled more than $100 million to militant groups that operated in Iraq at Iran's direction, according to the suit.

Since 2009, the five banks have agreed to pay about $3.2 billion to the U.S. government to resolve allegations that they handled money in violation of sanctions against nations such as Iran, Libya and Cuba. All the banks signed deferred prosecution agreements with the U.S. Justice Department in addition to settlements with U.S. banking regulators.

In a statement issued after its 2012 agreement with U.S. prosecutors and banking regulators, HSBC said it accepted responsibility for "past mistakes." Standard Chartered, which also reached an agreement in 2012, emphasized that it was cooperating with U.S. authorities.

The agreements did not allege a link between the transactions, which the U.S. government viewed as unlawful, and militant operations.

Some bankers have expressed resentment at the long reach of U.S. policies. In a 2006 email quoted in the complaint filed on Monday, a London-based Standard Chartered manager told a colleague, "Who are you to tell us, the rest of the world, that we're not going to deal with Iranians?"

Patrick Farr, a California-based plaintiff whose son Clay was killed by a roadside bomb in February 2006, said the lawsuit has given him "a sense that I was able to do something, hold someone accountable for his death."

The suit is the first case under the Anti-Terrorism Act in which former U.S. soldiers seek damages against international banks. It is also one of the first to be crafted as a conspiracy case.

The lawyers who filed the suit, Gary Osen and Tab Turner, were part of a team that tried an Anti-Terrorism Act case against Arab Bank earlier this year in Brooklyn. Jurors found Arab Bank liable for financing 24 Hamas attacks in Israel and the Palestinian Territories between 2001 and 2004.

That case linked Arab Bank specifically to wire transfers to alleged Hamas leaders and payments to Palestinians killed, injured and imprisoned in the anti-Israel uprising.

The new lawsuit does not assert a direct connection between the European banks and the allegedly Iran-directed attacks carried out in Iraq. Instead, the complaint claims that the banks indirectly facilitated the attacks by entering into agreements with Iranian banks to mask U.S. dollar wire transactions sent through the United States.

"Each defendant understood that their conduct was part of a larger scheme engineered by Iran," Osen said in an interview. At a minimum, he said, the banks were "deliberately indifferent" about the transactions they processed for Iran.

The case's theory of a conspiracy under the Anti-Terrorism Act has not previously been tested in court.

Osen said that through press accounts, declassified U.S. military reports and documents posted by WikiLeaks, he built a file on attacks on U.S. forces that were traceable to Iran. One of the boldest attacks took place in January 2007, when attackers dressed as American soldiers infiltrated a compound in Kerbala, Iraq, and killed five U.S. military personnel.

Osen said he sent a letter to the father of one of the soldiers killed in Kerbala, Johnathan Millican. He eventually traveled to Alabama to meet Mitchell Millican, who agreed to serve as a plaintiff. A soldier wounded in Kerbala, Billy Wallace, also signed on.

Charlotte Freeman, whose husband Brian was one of the soldiers killed in Kerbala, said she and her mother-in-law decided to join the case to make a statement. "I never suspected these big banks would turn a blind eye," she said. "Even if the case doesn’t get that far, at least the story is told. It needs to be exposed."