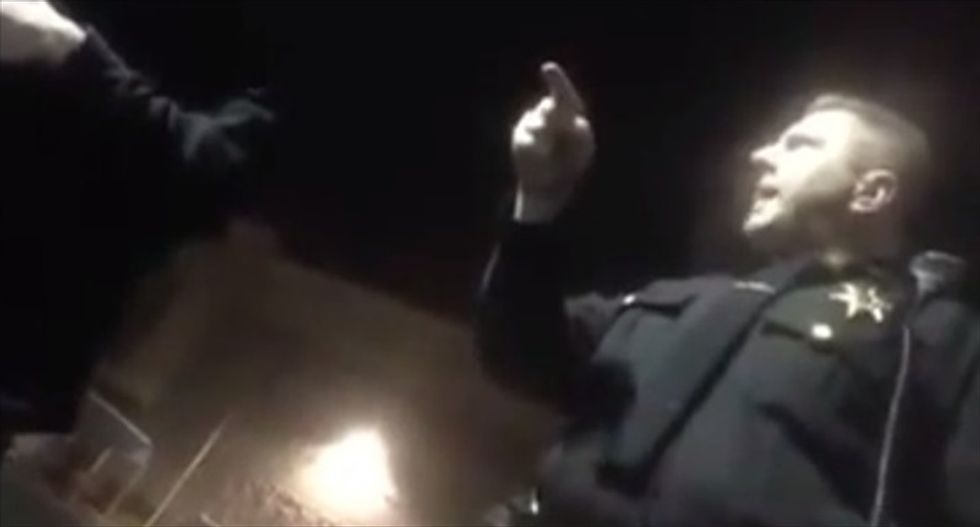 A New York state sheriff's deputy was suspended without pay after being caught on video harassing a gun owner and slapping him in the back of the head, Photography Is Not A Crime reported.

"We'll get a f*cking search warrant, alright?" Glans says to Fitch. "Wanna do that? Let me see your f*cking keys."

When Fitch asks why Glans wanted the keys, Glans says, "I'm going to search your f*cking car, that's why."

"You can't do that," Fitch says in response.

According to Roberts, Glans wanted to search the car after seeing a rifle in the backseat while Fitch and Roberts were not present. Roberts told Photography Is Not A Crime that he and Fitch had shown their identification to Glans, and Fitch told the deputy that he had purchased the weapon legally.

Fitch then apparently hands his keys to Glans, who tosses them to someone off-camera and says, "Search the f*cking car." Glans then calls Fitch an "a*shole."

"That was intense," Roberts says.

"You like that, huh?" Glans asks him. "I can get a lot more intense, believe me."

"Slap me around?" Robert asks.

"Yeah," Glans says. "I'll rip your f*cking head off and sh*t down your neck."

The search allegedly ended when Fitch showed Glans his receipt for the rifle.

Chief Richard L. Castle said in a statement that Glans was suspended without pay after officials were alerted to the footage of his encounter with Fitch and Roberts.

"At this time this is an internal personnel investigation as there is no criminal complaint from the involved civilian," Castle stated.

Glans was the subject of a $60 million lawsuit filed against both the county and the town of Wilton after he lost control of his patrol car and crashed into Douglas H. McEachron's car in March 1996. Glans was driving at more than 60 mph at the time of the collision, three times the local speed limit. McEachron, a father of six, suffered a traumatic brain injury and lost his sight. One of his children was appointed as his legal guardian following the crash.

The Albany Times-Union reported in 1999 that the city and the county agreed to pay a $6 million settlement to McEachron's family. Though a jury found Glans to be negligent, he was not required to pay any part of the settlement.

"If Doug had been in the sheriff's deputy's shoes, Doug would have been in prison now," McEachron's girlfriend, Melinda Dingley, said at the time.

Watch the footage of Glans' encounter with Fitch, as posted online on Friday, below.