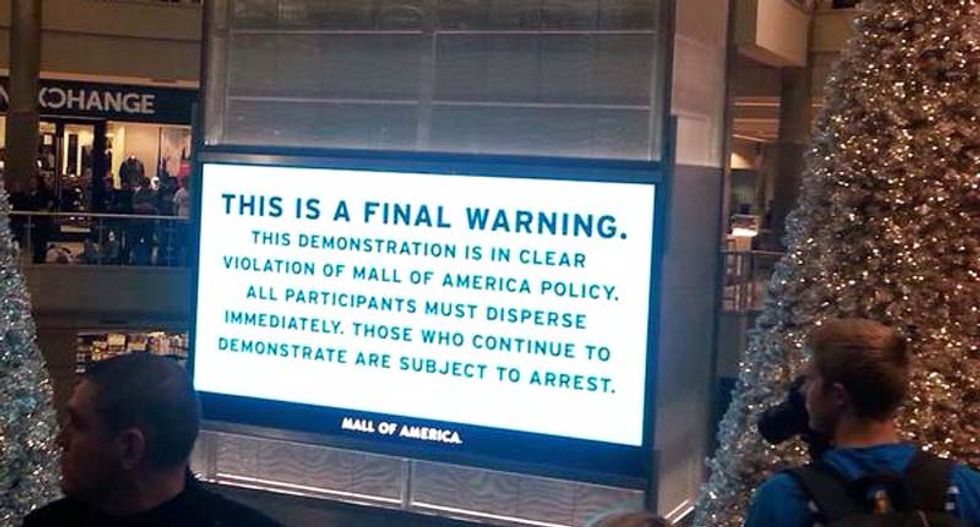 (Reuters) - Hundreds of protesters against police violence shut down part of the Mall of America in Minnesota on Saturday, during the final weekend before Christmas as shoppers scrambled to buy gifts at one of the nation's largest shopping centers, a community group member said.

The protest was the latest in a series of demonstrations across the United States in recent weeks over grand jury decisions not to charge white police officers in the killings of unarmed black men in Ferguson, Missouri, and New York City.

Police made some arrests in the demonstration on private property at the Mall of America in the Minneapolis suburb of Bloomington, said Bloomington police spokesman Mark Stehlik.

Stehlik could not immediately say how many were taken into custody, but the mall later said in a statement that police made about a dozen arrests.

The action organized by Black Lives Matter Minneapolis saw hundreds of participants gather at a rotunda at the mall where some staged a so-called "die-in," said a participant Mischa Kegan, 30, who is an organizer with the group Community Action Against Racism.

Protesters held their hands in the air while mall officials displayed an electronic billboard message warning demonstrators they risked arrest, according to an image posted on the Twitter account of Black Lives Matter Minneapolis.

A representative from the group could not be reached for comment.

The Mall of America statement warned organizers of its longstanding policy against protests. It said stores were closed on the east side of the mall as protesters were cleared out of the area, but the shopping and entertainment complex has since fully reopened.

The protest on Saturday came as shoppers filled malls and department stores across the United States on the last weekend before Christmas.