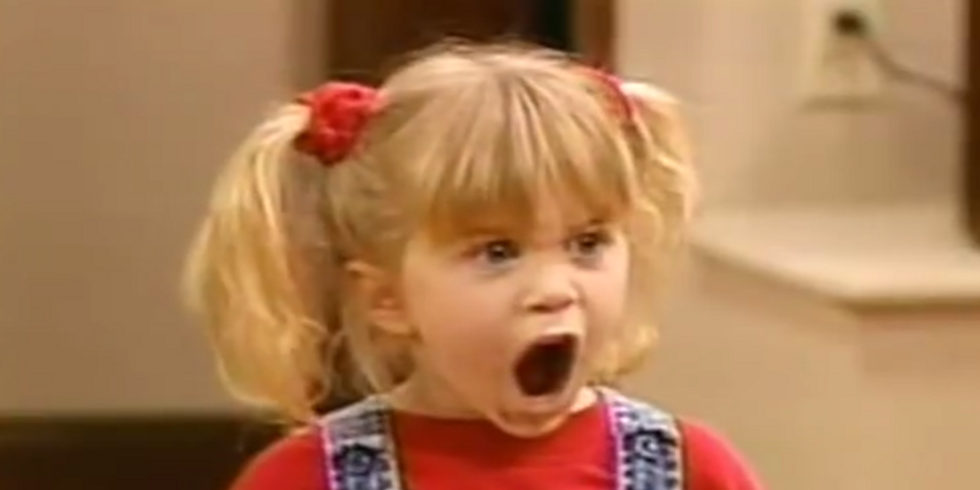 Tuesday, the Senate released a 600-page report on the CIA's use of torture.  While the extent to which President Bush knew about, understood or approved of the actions of the CIA isn't totally clear, he certainly didn't do anything to stop it. And he continues to defend the agency, saying during an interview on Tuesday,

I'll tell you this... We're fortunate to have men and women who work hard at the CIA serving on our behalf. These are patriots. And whatever the report says, if it diminishes their contributions to our country it is way off base. I knew the directors, the deputy directors, I knew a lot of the operators. These are good people. Really good people. And we're lucky as a nation to have them.

We will never know how Bush really responded to the revelations that are found in the report. Nor will we know if he became aware of them as president or more recently. But we have documentary evidence of someone who really resembles Bush: Michelle Tanner, the character from Full House, played by Mary Kate and Ashley Olsen. So, please enjoy these scary facts from the torture report along with GIFs which are the closest things we have to how Bush reacted

The CIA killed at least one detainee.

"A detainee who had been held partially nude and chained to a concrete floor died from suspected hypothermia at the facility."

Detainees, including an intellectually challenged man, were wrongly held.

"At least 26 were wrongfully held and did not meet the detention standard... These included an "intellectually challenged" man whose CIA detention was used solely as leverage to get a family member to provide information, two individuals who were intelligence sources for foreign liaison services and were former CIA sources, and two individuals whom the CIA assessed to be connected to al-Qa'ida based solely on information fabricated by a CIA detainee subjected to the CIA's enhanced interrogation techniques."

Detainees were waterboarded until they turned blue.

"A cloth covered" a detainee's "face, and [a CIA officer] poured cold water directly on [the detainee's] face to disrupt his breathing... when [the detainee] turned blue, Physician's Assistant  removed the cloth so [he] could breathe."

The CIA threatened to kill and sexually assault the relatives of the detainees.

The reports mentions, "threats to sexually abuse the mother of a detainee, and a threat to "cut [a detainee's] mother's throat."

Detainees were held in coffin-like boxes for over a week.

One "spent a total of 266 hours (11 days, 2 hours) in the large (coffin size) confinement box and 29 hours in a small confinement box, which had a width of 21 inches, a depth of 2.5 feet, and a height of 2.5 feet. The CIA interrogators told Abu Zubaydah that the only way he would leave the facility was in the coffin-shaped confinement box.'"

The CIA lied to the Justice Department.

"When the CIA determined that information it had provided to the Department of Justice was incorrect, the CIA rarely informed the department."

The CIA impeded congressional oversight of the program.

"The CIA did not brief the leadership of the Senate Select Committee on Intelligence on the CIA's enhanced interrogation techniques until September 2002, after the techniques had been approved and used."

The Torture didn't prevent any terrorism.

“At no time did the CIA’s coercive interrogation techniques lead to the collection of imminent threat intelligence, such as the hypothetical ‘ticking time bomb’ information that many believe was the justification for the use of these techniques.”

The CIA lied about the torture preventing terrorism.

“[i]n some cases, there was no relationship between the claimed counterterrorism ‘success’ and any information provided by a CIA detainee during or after the use of the CIA’s enhanced interrogation techniques... CIA representations were inaccurate and contradicted by the CIA’s own records. The CIA’s internal review also identified numerous inaccuracies in the CIA’s effectiveness representations—including representations to the President.”

A declassified CIA document reads that one detainee " provided the false information in an attempt to reduce the pressure on himself ... and to give an account that was consistent with what [he] assessed the questioners wanted to hear."

The CIA acted on the false information.

During an interrogation described as the "best session held to date" by the interrogation team" a detainee "fabricated information [that]resulted in the capture and CIA detention of two innocent individuals."

The CIA withheld information from The Bush Administration.