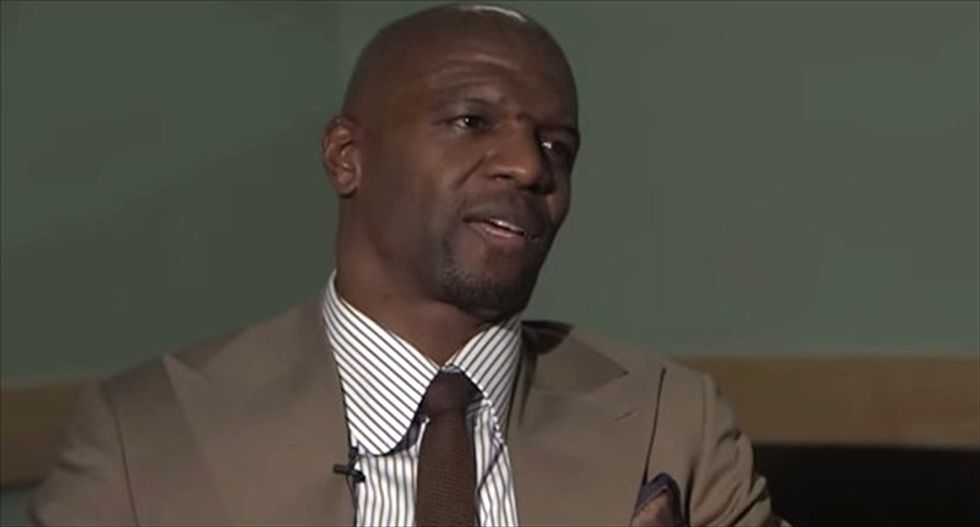 Actor and former football player Terry Crews tore into the idea of the "Man Code" in an interview coinciding with his appearance at a conference discussing the more toxic aspects of modern masculity, Jezebel reported.

"I'm living in the real world and you can drink the Kool-Aid all you want. A lot of guys love the Kool-Aid. The sports world is Kool-Aid world," Crews tells interviewer Elamin Abdelmahmoud. "You can do anything if you 'Just win, baby.' That's the [motto]. You're rewarded. And then what happens is, they win and they go, 'You know that girl? She's my trophy. I deserve that girl. In fact, she don't even want to be with me, but I don't care. I'm going to take it.' What kind of mindset is that? Never, never, never, never. never should that ever be accepted. That's not 'a code.' That's Taliban. That's ISIS."

Crews, who is currently starring in the police sitcom Brooklyn Nine-Nine, said he has gotten a mixed reaction from former NFL colleagues regarding his public remarks supporting feminism and calling on men to get past outdated ideas regarding gender roles.

Some, he said, will grab him "by the meat of the arm" and defend sexist behavior by saying, "It's Man Code, dude. Man Code!"

"Does 'Man Code' work when it's your daughter who gets raped?" Crews responded. "'Man Code' -- does that work when your mom gets abused?"

Crews also compared men who do not speak up to defend women who are victimized to people who neglected to act against abuses during the Civil Rights era.

"The people who were silent at the lunch counters, when it was the Black lunch counter and the white one or the schools were segregated, and they had two books in the Black school and the white school had everything and you were quiet, you were accepting it," he told Abdelmahmoud. "Same thing with men right now. If you don't say anything, you are, by your silence, it's acceptance. I'm not going to be silent."

The former NFL linebacker recently attended a conference organized by the White Ribbon Campaign, a Canada-based activist group that calls on men to help "end violence against women and girls, promote gender equity, healthy relationships and a new vision of masculinity."

"I'm very, very optimistic," Crews said regarding current conversations around gender roles. "Because now, when you're talking about young men coming up and wondering what's going on and looking at the results, they can make a choice. Whereas before, there was only one way to be: 'To be a man, you must hide your emotions.'"