Additional 1,000 US troops to remain in Afghanistan, says Hagel 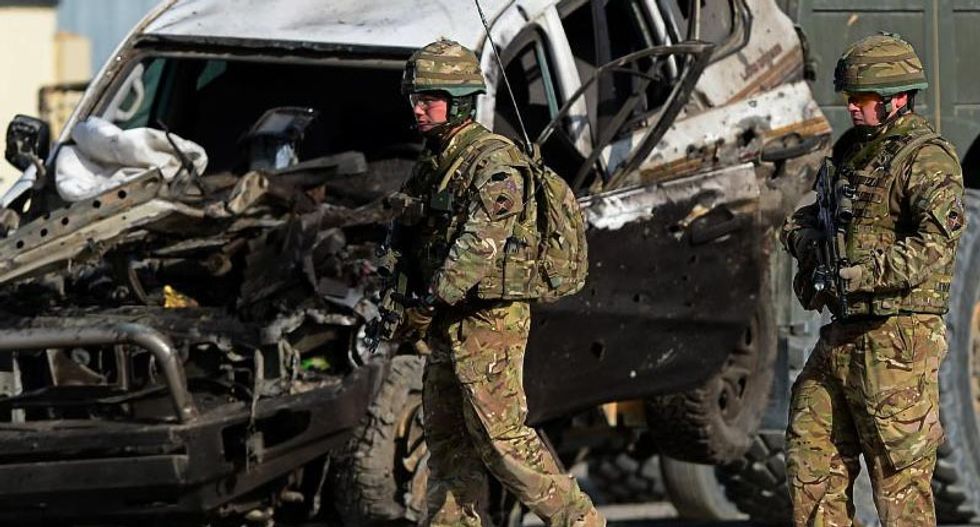 US soldiers walk through the site of a suicide attack in Kabul on October 13, 2014 (AFP Photo/Wakil Kohsar)

An additional 1,000 US troops will remain in Afghanistan next year to meet a temporary shortfall in NATO forces, US Defense Secretary Chuck Hagel said Saturday during a visit to Kabul.

President Barack Obama approved the move despite an earlier plan to limit the US force to a maximum of 9,800 troops in 2015.

A protracted Afghan election delayed the signing of security deals with the United States and NATO countries, which set back plans for Western governments to contribute troops to the post-2014 mission, Hagel said.

"President Obama has provided US military commanders the flexibility to manage any temporary force shortfalls that we might experience for a few months as we allow for coalition troops to arrive," he told a press conference.

"This will mean the delayed withdrawal of up to 1,000 US troops -- so that up to 10,800 troops, rather than 9,800, could remain in Afghanistan through the end of this year, and for the first few months of next year."

Concern is growing for Afghan stability as the NATO military presence declines, with the national army and police enduring record casualties in battle this year and following a series of high-profile Taliban attacks in Kabul.

About 130,000 NATO troops were fighting in Afghanistan in 2010 at the peak of the foreign intervention, after the 2001 fall of the Taliban regime that sheltered Al-Qaeda.

The NATO support force taking over on January 1 will be 12,500-strong, made up of mainly US, German and Italian troops.

Hagel said Obama's decision did not change the new mission -- which will focus on training Afghan forces -- nor did it alter a long-term deadline for a US troop drawdown over the next two years.

The Pentagon chief added US forces would also maintain a limited counter-terrorism mission to prevent "Al-Qaeda from using Afghanistan as a safe haven to threaten the United States".

Militants have targeted foreign guest houses, embassy vehicles, US troops and Afghan army buses in Kabul over the past month, undermining claims that the insurgency is weakening as NATO's 13-year war ends.

"The recent wave of Taliban attacks has made clear that the international community must not waver in its support for a stable, secure, and prosperous Afghanistan," Hagel said.

He said Afghanistan had "come a long way" over the past decade and that the newly-elected government and its security forces were ready to take charge of security.

"As difficult, as challenging, as long as this has been -- by any definition, the country of Afghanistan, the people of Afghanistan are far better off today than they were 13 years ago," Hagel told reporters.

Afghan and outside experts tend to offer a less optimistic view of the conflict, warning of the danger of an all-out ethnic civil war.

But Hagel insisted Afghanistan would not go the way of Iraq, where another US-trained army virtually collapsed in the face of an onslaught by Islamic state jihadists after American troops left the country in 2011.

Unlike in Iraq, the Afghan people had supported the presence of American and Western troops, Hagel said.

"They have welcomed us. They want us to continue to help them, to support them. That's a big difference between Afghanistan today and where we were in Iraq a few years ago," he said.

At their joint press conference, President Ashraf Ghani went out of his way to thank Hagel for the help of US troops.

Ghani's remarks were a stark contrast to his predecessor Hamid Karzai, who frequently railed against the American military.

"From January 1, the Afghan forces will assume countrywide security responsibility.

"At the same time, the new relationship with the US... will begin."

After a prolonged crisis over a fraud-mired election, Ghani came to power in September and signed a power-sharing deal with his poll rival Abdullah Abdullah.

Afghan soldiers and police have suffered soaring casualties, with more than 4,600 killed in the first 10 months of this year.

Obama on Friday named Ashton Carter, a technocrat and academic with long experience working in the Pentagon, to replace Hagel as defense secretary.

Hagel resigned last month, rejecting accounts that he was forced out.