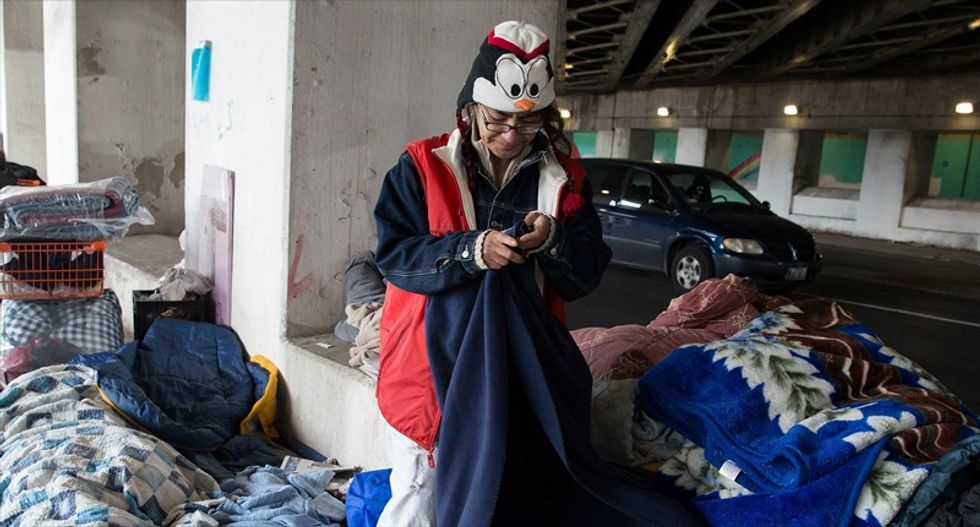 Blanca Rodriguez, 46, organizes her bedding under an overpass in Chicago, December 4, 2014. Rodriguez has been living under the overpass for 3 months. Photo by Andrew Nelles for Reuters.

For Teresa Sigerson, a former waitress who has lived under a Chicago expressway bridge for three years, the camp she shares with eight others provides shelter, companionship and some measure of security.

"There's safety in numbers," said Sigerson, 51, who begs during the day and sleeps between concrete bridge pillars under a highway northwest of downtown. "Everything's convenient here - you're by the stores, the highway."

This year, Sigerson almost lost her space when construction began on tall concrete barriers on the raised slabs where the homeless were make their beds. The project, which was halted this summer, was meant to dislodge the decade-old camp in Chicago's Avondale neighborhood.

Across the United States, local governments are moving to prevent outdoor camping by the homeless, according to advocates for the nation's nearly 600,000 homeless, estimated by the U.S. Department of Housing and Urban Development.

Government officials say they are trying to limit outdoor camping for the health and safety of the homeless and other residents. But homeless advocates say the bans are not a solution to homelessness and further stigmatize the poor.

Over a third of U.S. cities impose citywide bans on public camping, a 60 percent increase in such ordinances since 2011, according to a 2014 survey of 187 cities by the National Law Center on Homelessness and Poverty.

More than half the cities surveyed, 57 percent, prohibit camping in certain public places. Such bans have climbed by 16 percent over the past three years, the study found.

Rather than being exposed to bad weather and crime in camps, city officials say, the homeless are better served in city shelters, where they can sleep in beds and eat regular meals.

One of the most visible moves against camps occurred earlier this month in San Jose, California, where a site known as the "the Jungle" was cleared out for safety and environmental reasons. Before the city took down the camp, however, a $4 million program was established to help find housing for 200 former residents, said Ray Bramson, the city's homelessness response manager.

"The best long-term solution is to get people the support they need - then they won't be outside," Bramson said.

But Dr. Robert Okin, a psychiatrist and homelessness expert, said the camps are a symptom of the lack of affordable housing and other services. Disbanding them doesn't solve the problem, it just disperses it, he said.

Others say the bans or barriers are part of an effort to criminalize behaviors associated with the poor, such as panhandling.

"We basically think what's driving this is that visible poverty is bad for business and bad for tourism and detracts from efforts for cities to revitalize their urban cores," said Maria Foscarinis, executive director of the National Law Center on Homelessness and Poverty.

Chicago, which estimates it has about 6,300 homeless, doesn't ban outdoor camping but tries to connect people sleeping outside with services, said Matt Smith, spokesman for the city's Department of Family and Support Services.

In the case of the camp where Sigerson sleeps, local officials were concerned about the health of the homeless, while also aware that the site could make some passersby uncomfortable, said Martha Ramos, chief of staff for Alderman Rey Colon.

Construction of the barriers began in May but was halted in June after police complained that it had created a hazard because the sidewalk could no longer be seen from the street.

Some of the homeless wound up leaving the camp. Others stayed, including Sigerson, who said shelters kicked people out as early as 5 a.m., leaving the poor with nowhere to go at that hour.

Sigerson said her underpass community has rules of behavior, including keeping the area clean and not talking to passersby unless they speak first.

"We don't want to scare people," she said.