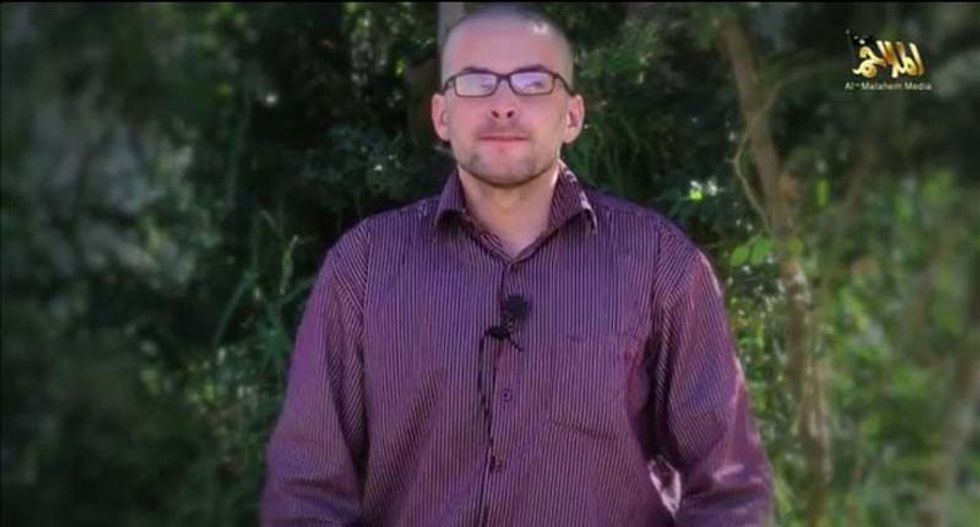 (Reuters) - U.S. special forces stormed a walled compound in a remote Yemeni village early on Saturday in an attempt to free Western hostages held by an al Qaeda unit, but an American journalist and a South African teacher were killed by their captors, officials said.

U.S. Secretary of State John Kerry and a Yemeni intelligence official said Luke Somers, 33, and South African Pierre Korkie, 56, were shot by their kidnappers shortly after the raid began in the arid Wadi Abadan district of Shabwa, a province long seen as one of al Qaeda's most formidable strongholds.

It was the second U.S. attempt to free Somers in 10 days and Kerry said it had been approved because of information that Somers' life was in imminent danger. "It was our assessment that that clock would run out on Saturday," one U.S. official said.

However, the Gift of the Givers relief group, which was trying to secure Korkie's release, said it had negotiated for the teacher to be freed and had expected that to happen on Sunday and for him to be returned to his family.

Al Qaeda in the Arabian Peninsula (AQAP) is seen by Washington as one of al Qaeda's most dangerous branches. The United States has worked with Yemen's government and via drone strikes to attack its leaders in southern and eastern Yemen.

"The callous disregard for Luke's life is more proof of the depths of AQAP's depravity, and further reason why the world must never cease in seeking to defeat their evil ideology," President Barack Obama said in a statement.

Obama said he had authorized the operation and said the United States would "spare no effort to use all of its military, intelligence and diplomatic capabilities to bring Americans home safely, wherever they are located."

A U.S. defense official said about 40 U.S. special forces troops, flown in by tilt-rotor CV-22 Osprey aircraft, had advanced to within 100 meters (yards) of the walled compound where the hostages were held before the defenders were alerted and a firefight started.

About 10 people, including al Qaeda guards and some civilians were killed in the fighting, said Ali al-Ahmadi, chief of Yemen's national security bureau. The Pentagon said it was unaware of any civilian casualties.

U.S. officials said they knew Somers was at the location, partly because of information gleaned during the earlier rescue attempt, and they were aware that a second hostage was there but did not know in advance who it was.

As the fight began, an al Qaeda guard darted inside the compound and then exited through the back. Gunfire was heard. That’s when American officials believe Somers and Korkie were shot.

They were each shot several times, said the U.S. officials, who declined to be identified. The men were treated by medics but one died during the flight out and another aboard a U.S. ship. No U.S. troops were hurt, they said. The raid lasted about 30 minutes.

Gift of the Givers said on its website: "We received with sadness the news that Pierre was killed in an attempt by American Special Forces, in the early hours of this morning, to free hostages in Yemen."

It added: "The psychological and emotional devastation to (Korkie's wife) Yolande and her family will be compounded by the knowledge that Pierre was to be released by al Qaeda tomorrow ... Three days ago we told her 'Pierre will be home for Christmas'."

Yolande, who was kidnapped with her husband in mid-2013, was released in January after intervention by Gift of the Givers.

Militants in the region often demand millions of dollars for the release of hostages, including in the Korkies' case, and Saturday’s incident was likely to again raise discussion about the wisdom of paying ransoms.

The United States, which refuses to make payments as they could encourage more kidnappings, is reviewing its approach to such cases but has said the payment ban will remain in place.

There was no new information about three other hostages, a Briton, a Turk and a Yemeni, who had previously been held alongside Somers and Korkie, a Yemeni security official said.

Lucy Somers, the photojournalist’s sister, told the Associated Press that she and her father learned of her brother's death from FBI agents at 0500 GMT (12 a.m. EST) Saturday. "We ask that all of Luke's family members be allowed to mourn in peace," she said from London. Somers had been in captivity for 15 months.

Kerry said the decision to mount the raid was based on fears that AQAP planned to kill Somers.

"Earlier this week, AQAP released a video announcing that Luke would be murdered within 72 hours. Along with other information, there was a compelling indication that Luke's life was in immediate danger," Kerry said.

U.S. officials on Thursday said American forces had already attempted to rescue Somers, without giving details. Yemeni officials had previously disclosed the release of six Yemenis, a Saudi and an Ethiopian hostage in a raid on Nov. 25.

Yemen's government issued a different account of the incident. It said in a statement carried on state media that its security forces had led the raid. It said the security forces had surrounded the house and called on the kidnappers to surrender, but they instead shot the hostages.

That led to an assault on the building in which four Yemeni security officers were also wounded, it said. The statement said the house belonged to suspected militant Saeed al-Daghaari, which another Yemeni security source told Reuters was in the village of Dafaar in the Wadi Abadan district of Shabwa.

"It's a very small village with only 20-40 houses. There were very quick clashes with the gunmen and then it was all finished," a tribal source from the area said.

AQAP on Thursday released a video showing a man it said was Somers saying: "I'm looking for any help that can get me out of this situation. I'm certain that my life is in danger."

Reuters was not able to independently verify the authenticity of that video, which was reported by SITE Monitoring.