Are women inherently less trustworthy than men? (Answer: No, but people believe it.) 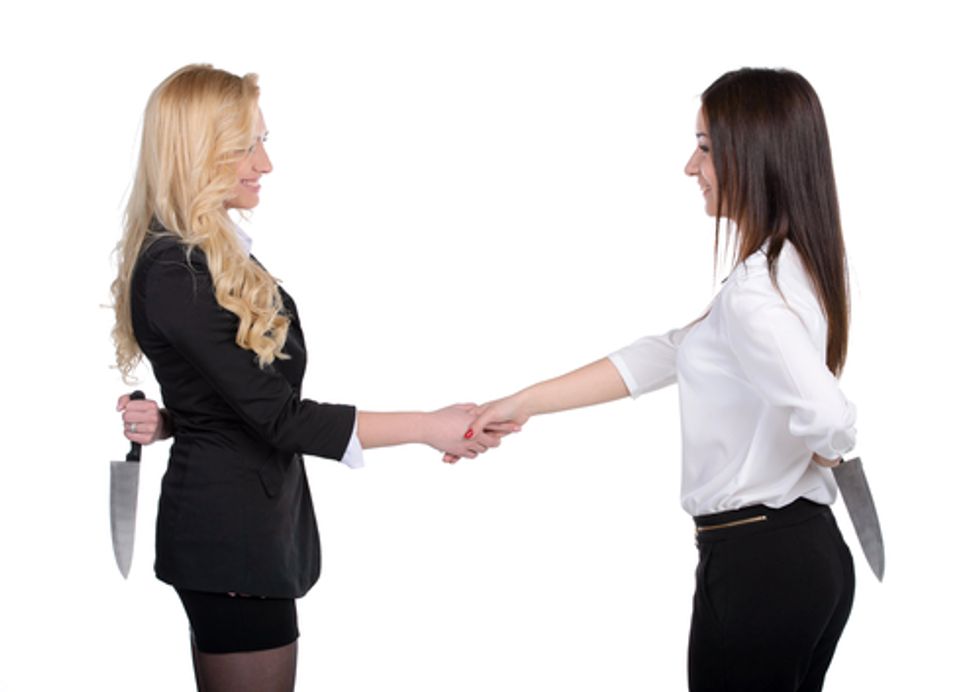 Stock photos: Reaffirming that stereotypes you suspect are widespread really are.

Hat tip to Feministing for linking this soul-searching piece by Damon Young at Very Smart Brothas, where he analyzes how men---and he includes himself in this---are socialized so often to assume women are lying/crazy/hysterical until proven otherwise, at least when women are saying things that aren't immediately flattering to yourself or men as a group. How men frequently make women feel like everything that comes out of our mouth is bullshit unless we can prove otherwise, and how men don't experience that same a priori assumption that they are too dumb/emotional/mendacious to be trusted. Some highlights, because it's just so good:

Trust. Well, the lack thereof. Generally speaking, we (men) do not believe things when they’re told to us by women. Well, women other than our mothers or teachers or any other woman who happens to be an established authority figure. Do we think women are pathological liars? No. But, does it generally take longer for us to believe something if a woman tells it to us than it would if a man told us the exact same thing? Definitely!

These numbers are a joke, but in service of a very serious point:

I’m speaking of my own relationship, but I know I’m not alone. The theme that women’s feelings aren’t really to be trusted by men drives (an estimated) 72.81% of the sitcoms we watch, 31.2% of the books we read, and 98.9% of the conversations men have with other men about the women in their lives. Basically, women are crazy, and we are not. Although many women seem to be very annoyed by it, it’s generally depicted as one of those cute and innocuous differences between the sexes.

And perhaps it would be, if it were limited to feelings about the dishes or taking out the garbage. But, this distrust can be pervasive, spreading to a general skepticism about the truthfulness of their own accounts of their own experiences. If women’s feelings aren’t really to be trusted, then naturally their recollections of certain things that have happened to them aren’t really to be trusted either.

This is part of the reason why it took an entire high school football team full of women for some of us to finally just consider that Bill Cosby might not be Cliff Huxtable. It’s how, despite hearing complaints about it from girlfriends, homegirls, cousins, wives, and classmates, so many of us refused to believe how serious street harassment can be until we saw it with our own eyes. It’s why we needed to see actual video evidence before believing the things women had been saying for years about R. Kelly.

He's right. The assumption that women are inherently liars and/or crazy is so ingrained that it actually is hard to see how pervasive it is. Women are subject to more skepticism for every word that comes out of our mouth, which is why it actually took a man---Hannibal Buress---calling out Bill Cosby before women finally felt free to come forward in large numbers. The only thing I'll add to Young's observation is that it's not just men. A lot of women enjoy the sense of easy superiority that comes from assuming that everything else other women say is bullshit.

This is a tough subject, because obviously some women, being people, are full of shit. But this assumption that words that come out of women's mouths are more untrustworthy than men's are baked deeply into our social consciousness. Sometimes women's untrustworthiness is attributed to inherent stupidity/craziness: We think we know what we're saying, but we're too dumb or hysterical to understand reality or ourselves. Sometimes it's attributed to malice, however, with women being painted as spiteful bitches who oppress innocent men with our lies. Either way, it's gas-lighting on a society-wide level.

Reading Young's piece, I realized the phenomenon he describes underpins every debate over sexism in our society, on one level or another. It's actually kind of stunning when you look at it. I'll list out how women's supposed untrustworthiness is invoked on every issue regarding sexism.

Abortion. Women think they want abortions, but they don't know that what they really want is to have that baby. So we just have to restrict abortion and they'll see the light eventually.

Equal pay. Women claim they are being discriminated against, but it's actually their own choices that lead to lower pay. If they were just smarter/more honest, they would see that!

Sexual harassment. Women claim they don't like it, but they secretly love the attention.

Rape. Women claim they are raped, but really they're just mad the guy didn't call them the next day.

Domestic violence. Women make this up to get sympathy and/or custody of the children.

Contraception. Women say it's "health care", but they are just greedy sluts who need to keep their legs shut.

Equal opportunity. Women say they are just as smart and ambitious as men, but deep down inside, they just want to stay at home and bake cookies.

Some of these have more than one lie women are supposed to be spouting, such as when women are outright accused of making sexual harassment up. So feel free to mention your favorites in comment. I'll add that the whole reason the concept of "mansplaining" took off so quickly is it named a phenomenon that  drives a lot of women bonkers, which is men just assuming that they know more about everything than a woman, simply because men are trustworthy and smart whereas women's words are assumed to be meaningless garbage unless proven otherwise.

This is changing, to be clear. Personally speaking, I spent much of my youth baffled at how no one seemed to give a shit about anything I said, so much so that I often felt like I could say it's raining and expect people, particularly men, to be disbelieve until they looked out a window. This still happens to me---to all women, I'd argue---all the time, but less than it used to. And obviously, women are increasingly being treated like actual experts in the world, though of course not without being dogged at every turn by hyper-skeptical men who cannot stand the idea of anyone listening to anything a woman has to say. It's getting better, however, bit by bit, woman with power by woman with power.

But it also goes a long way to answering a question that comes up a lot in comments at this blog: Why are there so many men out there who are dogged rape truthers, eager to accuse any and every rape victim imaginable of lying? One popular theory is that these men are themselves rapists, and therefore have a reason to push the myth that women routinely lie about rape. No doubt that's true of some of them---rapists are about 5% of the male population, and they have computers and opinions. But for the rest who don't rape but really want to disbelieve rape victims, I think this points to a motivation. They may not be rapists, but they are deeply invested in a system where women are considered lying until proven otherwise, not just about rape but about everything. They enjoy the power this gives them, particularly over women. Because they enjoy accusing women of being attention whores, gold-diggers, crazy bitches, or whatever mendacious stereotype they use to control and dominate women. And they sorely do not want to give up that power and so they are eager to push the idea that women are inherently full of shit and men inherently trustworthy, at every turn.