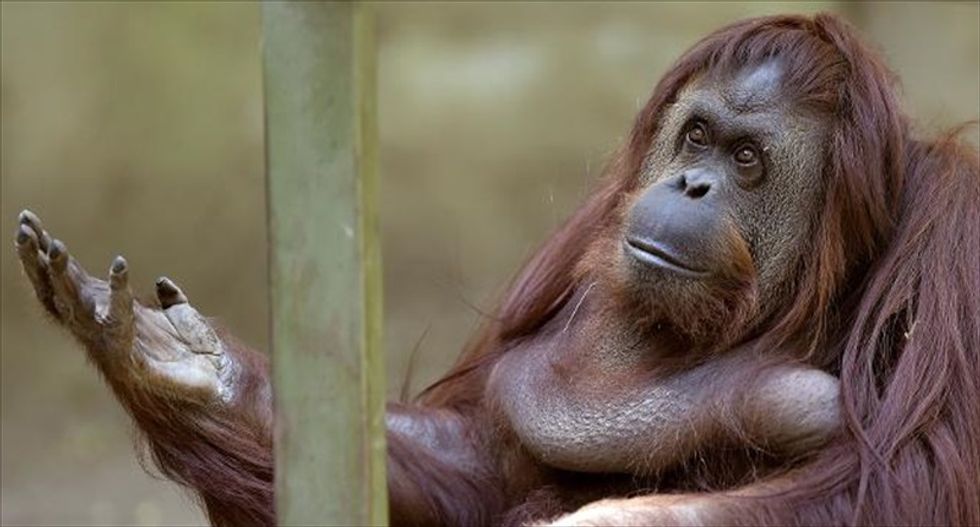 Sandra, a 29-year-old orangutan, has been cleared to leave the Buenos Aires zoo she has called home for 20 years, after a court ruled she was entitled to more desirable living conditions [AFP]

Sandra the orangutan took her newfound fame in stride after an Argentine court upheld her right to be freed from a zoo, munching a melon and putting the rind on her head for the cameras.

In a world first, a court ruled that Sandra was entitled to some of the basic rights of a human being and as such was being subjected to unjust confinement at the Buenos Aires Zoo, where she has lived for the past 20 years.

But Sandra appeared unfazed by all the attention as journalists gathered outside her enclosure Monday.

The 29-year-old orangutan lazily picked the seeds from a green melon as she ate it, then donned the rind as a hat atop her long reddish hair.

Zoo officials said they were still scratching their heads at the court's decision.

"This is how she's lived for the past 20 years. It's a large space, there are specialists who take care of her diet, monitor her health, and in general she lives in very good conditions," said Adrian Sestelo, chief biologist at the zoo.

But that is not the way everyone sees it.

Argentina's Association of Professionals and Lawyers for Animal Rights filed a habeas corpus writ -- a form of legal redress against unlawful imprisonment -- arguing that Sandra was a "non-human being" with thoughts, feelings and rights.

Sandra -- who was born in a German zoo in 1986 and moved to Argentina in 1994 -- is known for her shyness at the zoo, where she often hides from sight.

Animal activists had said that was a sign of depression, but Sestelo disagreed.

"It's not true. That shows ignorance of the species' basic biology," he told AFP.

"Orangutans live solitary lives. Their behavior is very relaxed, very calm," he said, as Sandra tugged on a green rope inside her enclosure.

She is a cross between the two species of orangutan, one from the Southeast Asian island of Borneo and the other from the nearby island of Sumatra.

Born after her mother was artificially inseminated at the Zoo Rostock in Germany, she has never lived in the wild.

Wild apes have a life expectancy of about 30 to 40 years. Captives can live longer.

Zoo officials said that even before the court decision, they had been exploring two new homes for Sandra: a nature reserve in Brazil or a zoo in the United States with a specialized orangutan shelter.

But Sestelo questioned the wisdom of taking the matter to court.

"Speaking from a technical point of view, all animals have the right to life and animal rights. What you can't do is humanize animal behavior," said the biologist.

"It's very characteristic of humans," he said. "We want to liken their behavior to ourselves, but that's a natural error of humankind."

A similar case was thrown out earlier this month by a New York court, when an animal rights group petitioned for a privately-owned chimpanzee to be considered a "person" for legal purposes.

Sandra looked uninterested in all the legal wrangling.

Approaching the photographers' lenses, she sized them up from behind her glass wall, then went to play under some leafy trees.