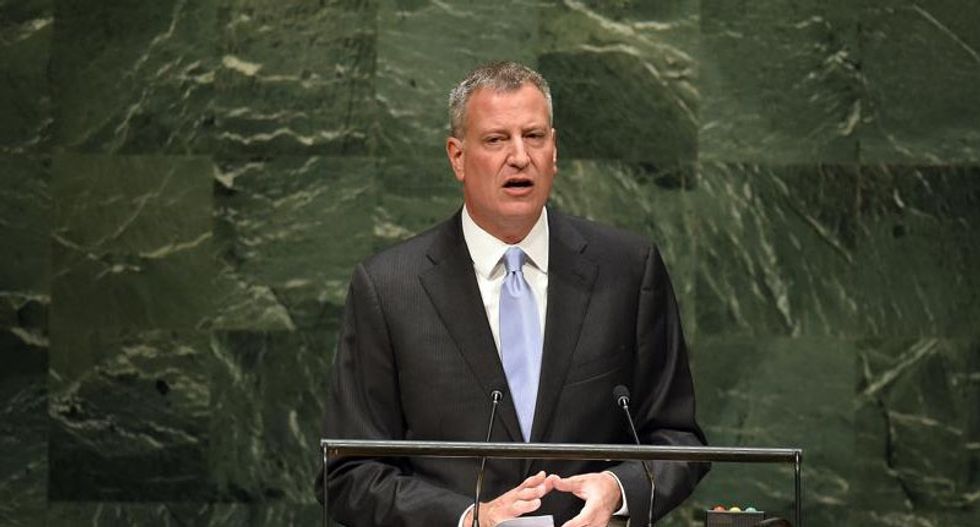 New York Mayor Bill de Blasio faced the biggest crisis of his political career on Sunday after a gunman killed two police officers in an attack intended to avenge recent police killings of unarmed black men in the United States.

New York police officers turned their backs on de Blasio in protest during a news conference and their union said the mayor had blood on his hands after Saturday's shooting. Police investigators have said the killings were the work of a 28-year-old black man with a long arrest record who may have had past mental troubles and who warned of his intentions on social media.

The gunman's posts on Instagram indicated he had been motivated by the deaths of 18-year-old Michael Brown and Eric Garner at the hands of police officers.

De Blasio was elected last year on a promise to advance civil rights after two decades of tough policing helped New York shed its reputation for violent crime. He has been sympathetic to the protesters who poured into New York's streets after a grand jury declined earlier this month to indict the officer who killed Garner in a chokehold in July as he resisted arrest.

The mayor's stance has led to sometimes tense relations with the city's largest police union. Critics within the force view the mayor as not supportive enough at a time of public anger.

"Mayors tend not to do well when the police department and its officers are not happy," said New York political strategist Hank Sheinkopf, whose clients have included de Blasio's predecessor, Michael Bloomberg.

The deaths of Garner in New York and Brown in Ferguson, Missouri, led to sometimes violent protests across the United States. A grand jury also declined to charge the officer involved in Brown's death. The cases provoked a bitter public debate about race and law enforcement that has drawn in President Barack Obama and his black attorney general, Eric Holder.

About 100 protesters, part of a group who recently met with de Blasio to call for police reforms, held a demonstration on Sunday night in Harlem. In contrast to usually boisterous protests critical of police, participants marched in silence bearing candles.

A candlelight vigil for the slain officers was also held in Brooklyn near the scene of the shooting.

Obama, briefed on Saturday about the police deaths while on vacation in Hawaii, called New York Police Commissioner William Bratton on Sunday to express condolences for the killing. Bratton heads the largest police department in the country.

"We worry about a city tempted to tension and division," Dolan said at St. Patrick's Cathedral.

Flags across the state flew at half staff and the 13-year-old son of one of the deceased officers bid his father good-bye in a Facebook post.

"It's horrible that someone gets shot dead just for being a police officer," wrote the son of Rafael Ramos, 40, who was killed alongside his police partner, 32-year-old Wenjian Liu.

Funeral plans had not yet been announced for Ramos and Liu, who were the first on-duty police officers to die in gunfire in the city since 2001. But the ceremonies could end up underscoring the divisions between the police and the mayor.

The police union had previously started a campaign in which officers could fill out a form asking de Blasio and other city officials not to attend their funerals if they were to die in the line of duty. It was not clear on Sunday how many officers had filled out the forms.

Across the country, police departments were on edge on Sunday following the attack in New York and another in Florida. A police officer on duty outside Tampa was shot to death early Sunday and a suspect has been arrested, local authorities reported. There was no indication yet of a motive.

The St. Louis Police Officers Association on Sunday asked the department to step up security, while Baltimore's police union said the current political environment was the most dangerous for officers since the 1960s.

Police said the gunman, Ismaaiyl Brinsley, shot and wounded his former girlfriend in a Baltimore suburb before traveling to New York City and attacking the officers while they were sitting in their patrol car.

Just before the shooting, Brinsley said to two bystanders, "Watch what I'm going to do," NYPD Chief of Detectives Robert Boyce told a news conference.

Brinsley killed himself soon after the shooting.

Georgia court documents portray Brinsley as having had numerous run-ins with the law and possible mental trouble.

He was booked into jail in Fulton County, Georgia, nine times between 2004 and 2010 on charges including simple battery, obstructing a law enforcement officer and terroristic threats.

A sentencing document in Cobb County, Georgia, where he pleaded guilty to weapons charges in 2011 showed that when asked if he had ever been a patient in a mental hospital or been under the care of a psychologist or psychiatrist, Brinsley said, "Yes," but there were no details of his mental problems. He said he had gone as far as 10th grade in school.

He was arrested a total of 19 times, Boyce said. Members of Brinsley's family told NYPD investigators that he had attempted suicide in the past and that his mother believed he had undiagnosed mental health issues, Boyce said.

"His mother expressed fear of him and hadn't seen him in a month," Boyce told reporters.

Police identified Brinsley's former girlfriend as Shaneka Nicole Thompson, 29. She was in critical but stable condition at an area hospital, police said.

Why do black holes twinkle? We studied 5,000 star-eating behemoths to find out

Black holes are bizarre things, even by the standards of astronomers. Their mass is so great, it bends space around them so tightly that nothing can escape, even light itself.

And yet, despite their famous blackness, some black holes are quite visible. The gas and stars these galactic vacuums devour are sucked into a glowing disc before their one-way trip into the hole, and these discs can shine more brightly than entire galaxies.