Back from holiday break, US students walk out over Ferguson decision 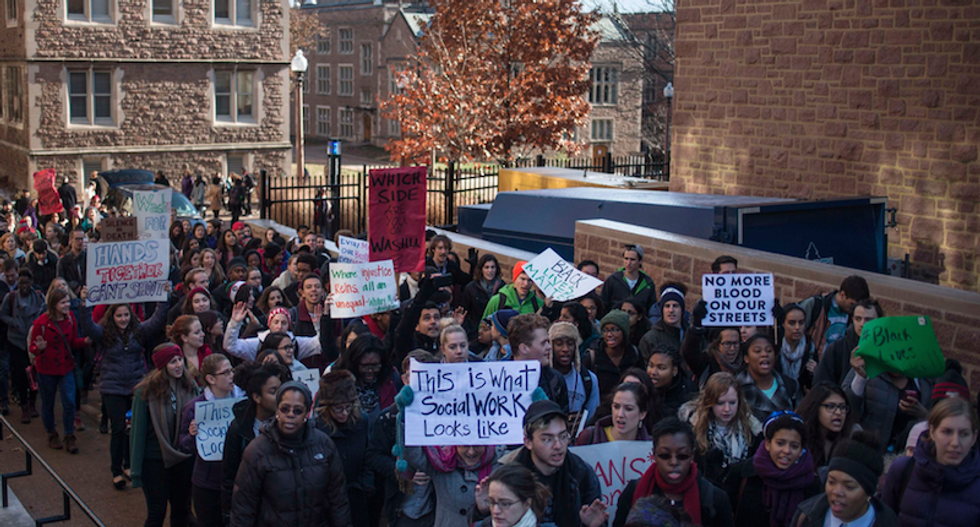 High school and college students ditched classes on Monday in several U.S. cities to protest against a decision not to indict a Missouri police officer who fatally shot an unarmed black teen in August.

Anger has continued to swell over the long Thanksgiving holiday weekend over the decision of a St. Louis County grand jury last week not to indict Darren Wilson for the death of Michael Brown.

"Michael Brown's death was a catalyst for a lot of issues in this country," said Karisa Tavassoli, a 20-year-old student at Washington University in St. Louis, where about 300 students braved freezing temperatures to stage a walkout on the first day of class after the holiday. "We are fighting for the oppressed."

Protesters including students in Northern California shut down two busy intersections near Stanford University. Several hundred more near Boston blocked the street in front of Harvard University and students also walked out in New York, Los Angeles and Baltimore.

Protesters took to the streets near the nation's capital to block a major commuter route, snarling the morning rush hour.

In Los Angeles, about 30 protesters carrying signs saying "Ferguson is everywhere" and "Black lives matter" marched from a police station in the South-Central neighborhood to an intersection where an unarmed 25-year-old black man, Ezell Ford, was shot to death by police two days after Brown's slaying.

In downtown Seattle, where the police department is under federal monitoring over allegations of excessive force, some 200 people called for an ongoing dialog about race relations and police tactics in a largely peaceful demonstration and march that saw tense moments with riot gear-clad police.

Brown's death drew worldwide attention to the predominantly black St. Louis suburb where most of the police officers are white.

Lawyers for Brown's family said the teen had his hands up and was trying to surrender. Wilson, who resigned last week, said he was acting in self-defense.

On Monday, President Barack Obama asked Congress for $263 million to pay for body cameras for police officers to wear and other responses to the Ferguson events.

The groups involved in Monday's demonstrations had also urged supporters to refrain from shopping on the Friday after Thanksgiving, the kickoff to the U.S. holiday shopping season.