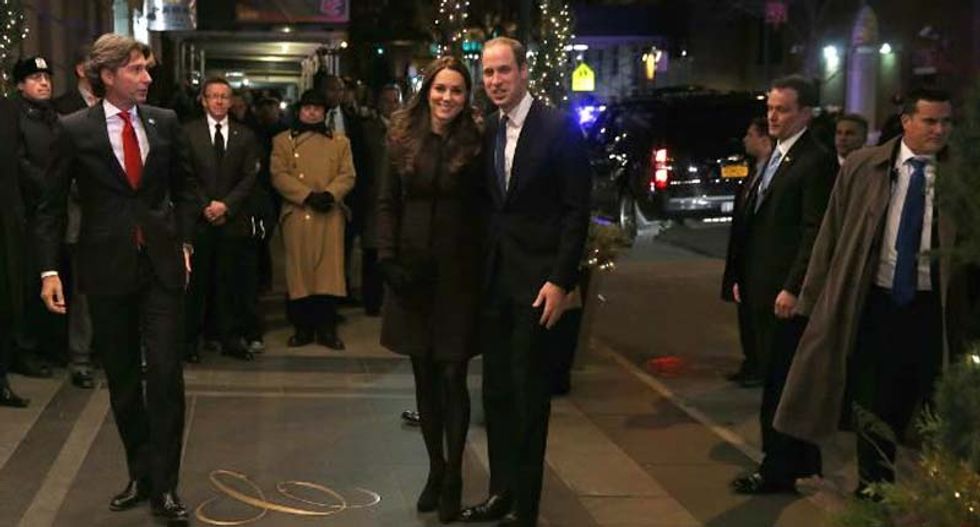 Crowds of jubilant royal watchers cheered as Britain's Prince William and his pregnant wife Kate arrived in New York City on Sunday, kicking off a three-day trip to the East Coast.

The Duke and Duchess of Cambridge's motorcade pulled up outside the Carlyle Hotel on the Upper East Side around 5:45 pm (2245 GMT), and the couple smiled broadly before heading into the building.

"The Duke and Duchess of Cambridge have arrived in NYC!" the British consulate in New York tweeted, along with a picture of the beaming pair.

Kate, who is due to give birth to the couple's second baby in April, was wearing a purple maternity coat. Their first-born son George is not coming on the visit.

The royal couple's trip will see William and Kate, both 32, mix diplomacy with supporting their favorite causes and promoting British business interests.

It is their first trip to the United States together since a brief visit to the Los Angeles region in 2011 shortly after their wedding. It also marks their second outside the Commonwealth family of nations.

William is scheduled to meet US President Barack Obama in the White House on Monday for talks about illegal wildlife trading, an issue close to the prince's heart.

Second in line to the throne after his father Prince Charles, William is now doing more of the long-haul work for the British monarchy as Queen Elizabeth II approaches her nineties.

"It's a significant trip which is trying to establish William further in a diplomatic, statesmanlike role," Robert Jobson, author of "The New Royal Family," told AFP.

The visit will undoubtedly revive memories of the 1985 trip made by William's parents, Charles and Diana, when the princess, wearing a dazzling gown, danced with US president Ronald Reagan and Hollywood star John Travolta.

And the royal couple is staying at the same New York hotel -- The Carlyle, known for hosting global powerplayers over the years -- that Diana also visited.

After the meeting with Obama, William will address the World Bank on illegal wildlife trading.

"It is quite a coup for William that he has been invited to the White House by Obama because this is his topic, something he has specifically raised awareness about," royal biographer Penny Junor said.

It will be the first time either William or Kate will have been to New York or Washington.

The couple will attend their first NBA basketball game on Monday, the league said, when they will see LeBron James and his Cleveland Cavaliers visit the Brooklyn Nets.

Sir Peter Westmacott, British ambassador to the US, told CBS News that he was confident the protests that have taken place over several nights in New York demanding justice for black men killed by white police officers would not overshadow the visit.

"We obviously hope not because this is a visit to which we attach a great deal of importance," he said.

William, who is training to become an air ambulance pilot in his day job, is also preparing for a trip to Japan and China in late February-early March, without Kate ahead of her due date.

That visit is being viewed in Britain as an attempt to improve top-level diplomatic relations with Beijing.

"In terms of foreign travel, I would guess that he and his younger brother Prince Harry would be the ones that do it in future because they have got huge appeal," Junor said.

"He's definitely a draw, people love him the world over. They will use him, for sure," said the author, who wrote "Prince William: Born to Be King."