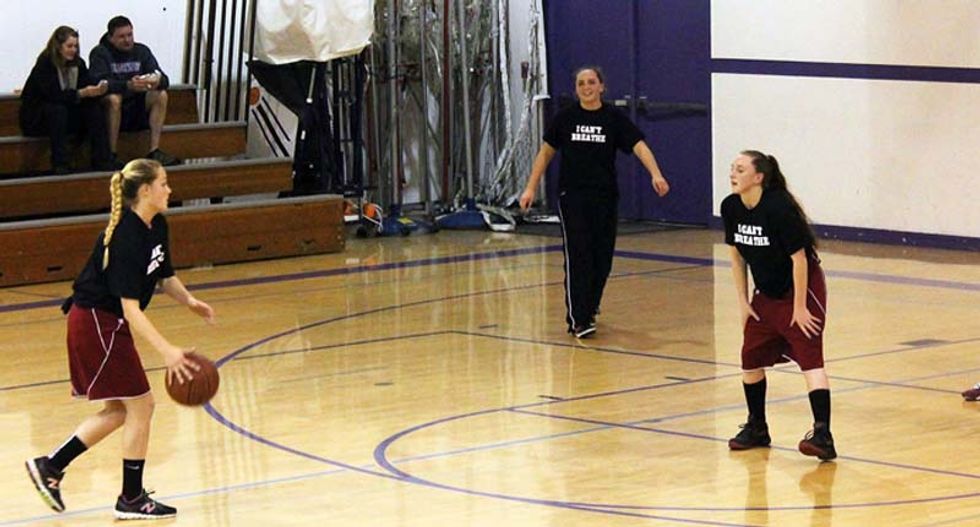 A northern California high school has ordered student athletes to not wear "I Can't Breathe" T-shirts for their warmups at an inter-school basketball tournament after the school was disinvited by the host school's athletic director.

All but one of the member of boys team agreed to comply with the t-shirt ban, but the girls team withdrew after their coach said the school would not be able to field enough players who agreed to the ban.

Fort Bragg Principal Rebecca Walker issued a statement on Friday saying school administrators respected the Mendocino teams "for paying attention to what is going on in the world around them," but that the T-shirts were banned for security reasons.

"To protect the safety and well-being of all tournament participants it is necessary to ensure that all political statements and or protests are kept away from this tournament," wrote Walker, saying she was speaking on behalf of the athletic director and the Fort Bragg school superintendent. "We are a small school district that simply does not have the resources to ensure the safety and well-being of our staff, students and guests at the tournament should someone get upset and choose to act out."

Mendocino varsity teams previously wore  the "I Can't Breathe" T-shirts before a game with Fort Bragg on Dec. 16, and before games at two other tournaments without receiving any blowback, said Mendocino coach Caedyn Feehan.

"I didn't even know what it meant. I thought it was a joke about how I had conditioned them so hard," Feehan said. "None of the administrators knew what it was or that any of them were doing it in advance. This was entirely for their cause that they had strong feelings about."

Marc Woods, whose 16-year-old son Connor plans to sit out the tournament, says his son wore the T-shirt at the Dec. 16 game in the name of team solidarity, but "now that's become a First Amendment violation, that's what he is fired up about."

Woods, whose father was a California Highway Patrol officer, said he is outraged by what he sees as school intimidation to silence players and fans alike. According to Woods, Fort Bragg administrators have warned spectators who plan to protest the T-shirt ban that they will be asked to leave.

"It doesn't take a lot to suppress the exchange of ideas when you put fear into it," Woods said.

Professional players including LeBron James, Derrick Rose and Kyrie Irving have worn "I Can't Breathe" shirts during warmups this month with the blessing of the NBA.