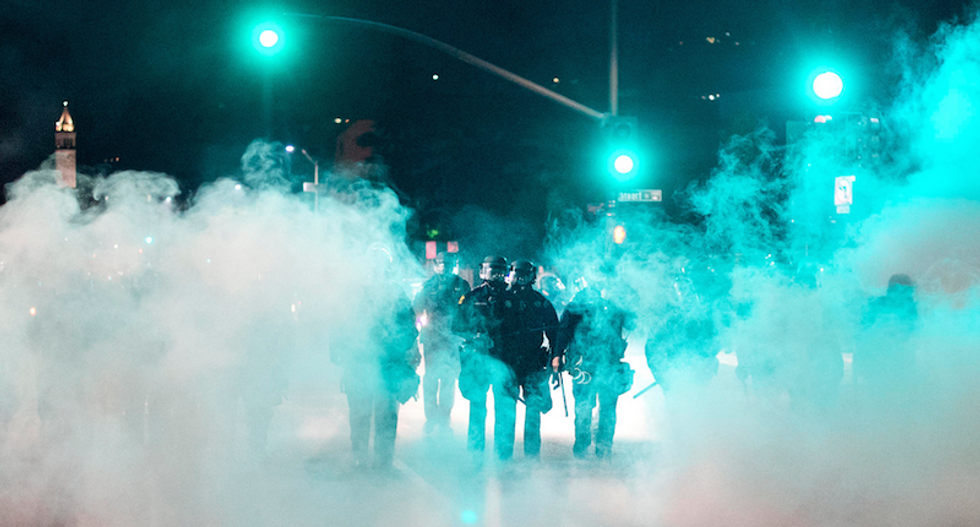 Police officers deploy teargas while trying to disperse a crowd comprised largely of student protesters during a protest against police violence in the U.S., in Berkeley, California early December 7, 2014. (REUTERS/Noah Berger)

Angry crowds hurled objects at police who retaliated in a second night of clashes in northern California following the death of a black man who was put in a chokehold by a New York police officer.

Police fired gas after being targeted by what they called "explosives."

They moved in to clear roadways as protesters swarmed freeway overpasses at two locations in Berkeley, a Reuters reporter saw.

Police made several arrests among the demonstrators who numbered well over 500, and a number of stores in Berkeley were looted. One demonstrator who tried to prevent the looting was assaulted, police said.

Reuters could not immediately obtain further information from police, who some demonstrators said on Twitter had fired rubber bullets. Protesters have demonstrated daily in several U.S. cities since a grand jury's decision on Wednesday not to bring criminal charges against the white police officer whose chokehold contributed to Eric Garner's death in New York City in July.

The killings of Garner and of Michael Brown, an unarmed black teen, in Ferguson, Missouri, have highlighted the strained relations between police and the black community and rekindled a national debate over U.S. race relations.

New York was quieter over the weekend, but West Coast cities had braced for trouble after clashes in Berkeley and Seattle, Washington on Saturday.

Arrests were made, but exact numbers were not available. Patrol vehicles were vandalized, the division said on Twitter. It also displayed photos of rocks it said were hurled.

Authorities closed the local Bay Area Rapid Transit station for a second night due to the unrest. The two nights of looting and rock-throwing on the West Coast contrasted with mostly peaceful demonstrations elsewhere.

The decision by a grand jury not to return an indictment in Brown's killing ignited two nights of arson and rioting in the St. Louis suburbs.

Earlier on Sunday evening hundreds of protesters began marching down a main thoroughfare in Berkeley after massing on the campus of the University of California.

Officer Jenn Coats of the Berkeley Police Department said the crowd, estimated at 500 to 600, was peaceful.

On Saturday evening, what had begun as a peaceful march ended in an extended confrontation between demonstrators and police, resulting in six arrests, damage to local businesses and a minor injury to a police officer.

In Seattle about 200 people gathered on Sunday evening, a day after a demonstration drew more than 1,000 protesters, with some throwing rocks and attacking police in clashes that resulted in seven arrests. There was one arrest on Sunday.

New York Police Commissioner Bill Bratton said on Sunday the department's internal investigation into Garner's death could last four months. He said he would review the results to decide if officers involved in Garner's arrest had violated department policy. The Justice Department is doing its own investigation.