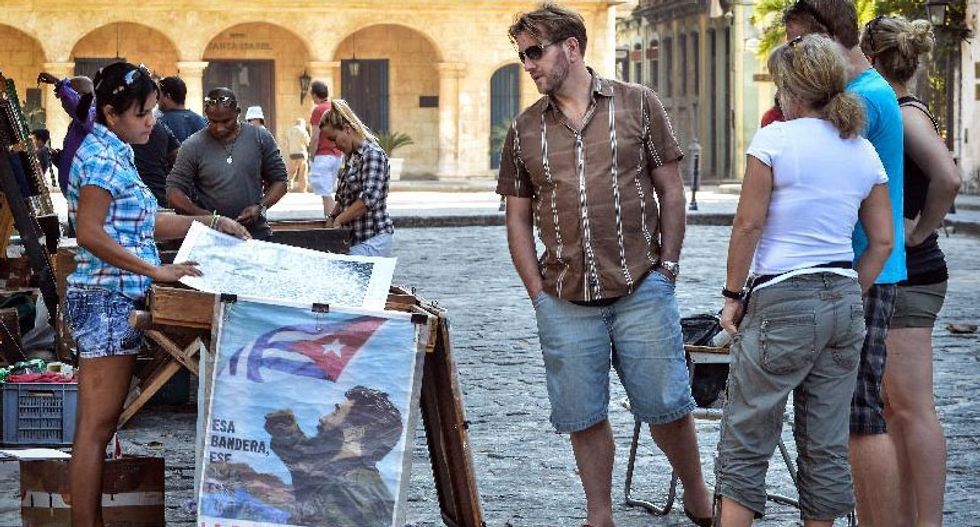 Tourists look at posters for sale in Havana, on December 18, 2014 (AFP Photo/Adalberto Roque)

Cuba's nascent private sector is bracing for an influx of visitors should the US embargo ease, but many businesses in the communist country appear unprepared for a torrent of tourists.

Currently, most hotels, guest houses and restaurants in Cuba are state-owned, though the number of private enterprises has grown in recent years.

"Not in our ability to accommodate an increase in the clientele, nor in terms of the quality of what we have to offer," he added.

But he said that would soon change.

"People will wake up quickly and start to excel, start to offer what people want," Nunez said, speaking at the restaurant in a crumbling Havana building, where photos of Uma Thurman, Benicio del Toro and Jack Nicholson hang on the walls.

On Wednesday, US President Barack Obama announced a historic breakthrough between Cuban-US relations, moving to revive diplomatic ties and ease a trade embargo, ending 50 years of hostility between the former Cold War foes.

The breakthrough could also mean an easing of existing travel restrictions.

Every year, more than 90,000 US citizens travel to Cuba, despite restrictions on how much they can spend and on the Cuban products they can bring home.

That figure is likely to swell once the Obama administration eases restrictions on the 12 categories of people currently allowed to travel to Cuba, such as US-based relatives of residents of the island.

It will require an act of Congress -- which will be Republican-dominated come January -- to repeal the economic and travel embargo entirely.

Cuba's tourism minister estimates that a million additional tourists could come to the island annually, on top of the three million that already visit each year from all over the world.

But restaurant manager Jorge Fernandez said a sudden flood of visitors would create a challenge for the Cuban private sector.

"Because although American tourists are very generous, they are very demanding," he said, speaking at the privately owned La California restaurant in Old Havana.

"At the same time, it would be a big opportunity to strengthen a sector that survives with little income," he said, noting that Cuban businesses have little access to wholesale markets and often have to pay high fees for equipment and raw material.

As part of the thaw, Obama authorized the sale and export of certain "goods and services" to the Cuban private sector, which could be a boon.

The private sector is supported by 450,000 self-employed entrepreneurs, known as "cuentapropistas," compared to five million civil service workers in a country of 11.1 million.

Nunez, speaking from a private dining space in La Guarida, said despite his reservations about the private sector's capacity, the changes announced last week are "encouraging."

Cuba's economy has been slowly opening since the fall of the Soviet Union, and private businesses -- namely restaurants -- started multiplying in 2008 after Raul Castro introduced economic reforms.

That was important for the tourism sector, which is Cuba's third biggest earner, bringing in $2.5 billion annually.

Restaurant owner Carlos Marquez said most entrepreneurs in Cuba stand to benefit from the thawing of relations with Washington.

He is hopeful that easing the embargo will only be a good thing for business at his La Commercial San Cristobal diner in downtown Havana.

"We'll have to see how things go, but everything Obama said benefits us," Marquez said.