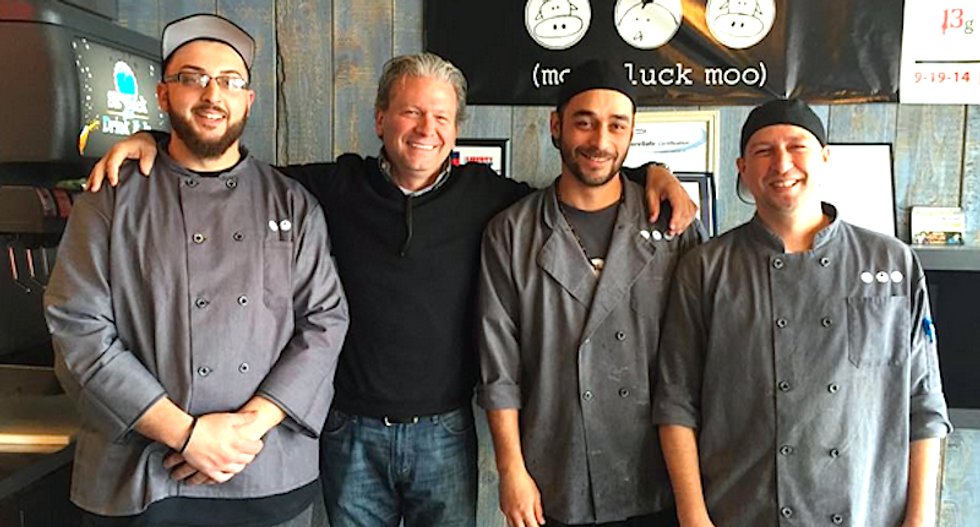 A Detroit eatery is proving that it’s possible to turn a profit while paying fast-food workers nearly double the minimum wage.

Workers made $12 an hour when Moo Cluck Moo opened last year, but Parker said revenues have increased enough to afford pay hikes for all his employees.

“I’m not altruistic,” Parker said. “But I’m also not trying to extract as much money as possible out of the restaurant.”

The higher wages encourage workers to stick around – which saves the business money on training -- and take on additional responsibilities, Parker said.

Four workers are needed for the average shift, Parker told Crain’s, and each restaurant is open 10 hours a day, seven days a week.

Labor makes up about 40 percent of the restaurants budget, with food costs at about 30 percent.

“I’m taking less money personally,” Parker said. “My question is, how much do we have to make? How big of a pile of money do CEOs have to sit on?”

All employees are expected to bake buns from scratch every day, make sauces for the sandwiches, and prepare burgers and chicken sandwiches.

But employees say they like the variety – not just the higher pay.

"It's more fun than I've had at other jobs, because we get to do everything ourselves," said manager Dan Chavez. "It feels good just to be able to pay my bills and enjoy a little of life.”

Two other employees, who’ve been with the restaurant since it opened, said they were able to pay for college tuition without taking out loans and send children to Boy Scout and cheerleading camps.

“I love what I do every day and this is very important for me,” said Jennifer Aguilar, a mother of two. “I can do things for my children that I couldn’t do as a kid.”

Customers pay more for food at Moo Cluck Moo, but the restaurants also use high-quality ingredients without hormones and preservatives.

Grass-fed Moo Burgers cost $6 and up -- just over a dollar more than a McDonald’s Big Mac, which typically sells for about $4.80.

Economists say smaller chains like Moo Cluck Moo are unlikely to pressure companies like McDonald’s or Burger King to change their labor practices or food options.

Michael Strain, an economist at the conservative American Enterprise Institute, told NPR that Moo Cluck Moo appeals to customers who are willing to pay more for higher-quality food, while the larger chains appeal to customers looking for cheap options.

He said companies would likely turn to automation – eliminating many fast-food jobs -- if all restaurants were required to pay the sort of wages Moo Cluck Moo offers.

Parker said his restaurant had turned a profit this quarter, and he plans to open two more locations in the Detroit area.