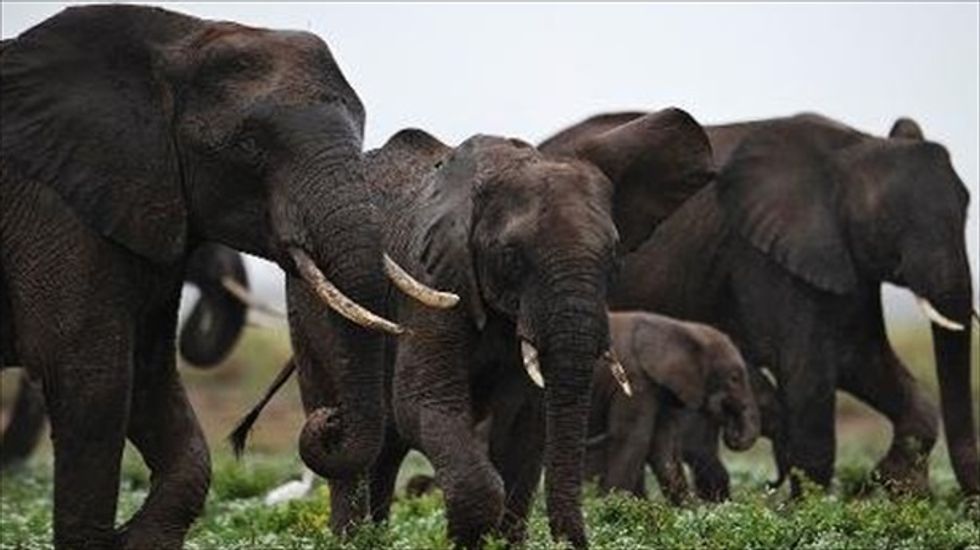 The slaughter of Africa's elephants and the illegal trade in ivory in China are "out of control" and could push wild elephants to extinction within a generation, conservationists said Tuesday.

Soaring quantities of ivory are being sold in rapidly growing numbers of shops in China, with over 100,000 elephants killed from 2010 to 2012, said the joint report from the Save the Elephants and The Aspinall Foundation campaign groups.

"Skyrocketing demand for ivory in China -- the wholesale price of raw elephant tusks has tripled in just four years since 2010 -- have sparked a booming trade in smuggled ivory that is driving the unsustainable killing of elephants in Africa," said the report released in the Kenyan capital.

Poaching has risen sharply across Africa in recent years, fueled by rising demand in Asia for ivory -- which finds its way into jewelery and ornaments -- and rhino horn, which is coveted as a traditional medicine.

Investigators from the campaign groups visited scores of shops and factories in China, the world's main ivory manufacturing centre, comparing quantities on sale and costs.

"Every metric on the ivory trade has exploded upwards in recent years. The prices of raw and worked ivory in China, number of licensed carving factories, retail outlets both illegal and legal, items on sale, all have shot up," they said.

"Meanwhile the weight of ivory seized and number of elephants being killed in Africa have also increased."

The number of legal ivory stores in China shot up from 31 in 2004 to 145 last year, while the number of ivory carving factories increased from nine to 37 over the same period.

The report warns that illegal sale of ivory in unlicenced stores is growing just as fast and even when carvings had the necessary paperwork, that "was no guarantee that the selling was legal."

"China faces enormous challenges in law enforcement to control the ivory trade, as the number of rich business people in the country with interest in buying ivory continues to increase," the report added.

"Ever-growing numbers of Chinese contract workers are going to Africa and buying increasing quantities of illegal ivory to smuggle."

Save the Elephants estimates an average of 33,000 elephants have been lost to poachers each year between 2010 and 2012.

Some in China using the legal trade in ancient mammoth tusk "as a cover for selling elephant ivory," while the "growing legal ivory trade in China is providing a smokescreen for illegal activity."

China is making efforts to stem the trade, the report's authors said, but added that the measures were not going far enough.

Beijing has closed down at least 10 officially designated factories and stores, "jailing hundreds of dealers and sentencing 37 smugglers to life in prison," stamping out live auctions of ivory by almost 97 percent, the report said.

"Despite these efforts official inspections have evidently been unable to keep up with the escalation of the illegal market," it added.

"China holds the key to the future of elephants," said Iain Douglas-Hamilton, founder of Save the Elephants. "Without China's leadership in ending demand for ivory Africa's elephants could disappear from the wild within a generation."