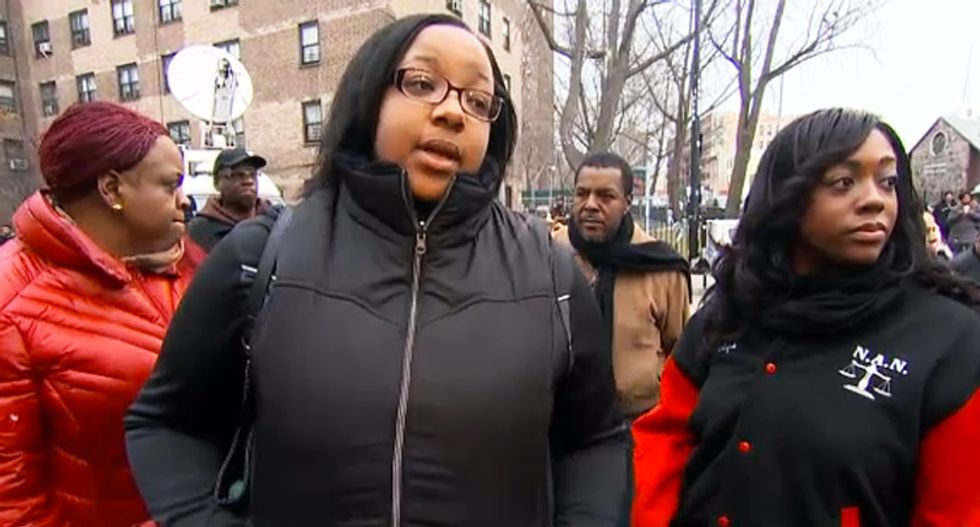 The daughter of Eric Garner, the Staten Island man who died at the hands of police in July, visited a police memorial and offered support to the families of  the two officers killed Saturday in the line of duty.

Emerald Garner appeared at  the New York City Police Memorial on Monday, telling reporters she wanted the families of the two slain police officers know that she "stands with them," according to ABC.

"I just had to come out and let their family know that we stand with them, and I’m going to send my prayers and condolences to all the families who are suffering through this tragedy," Garner said. "I was never anti-police. Like I said before, I have family that’s in the NYPD that I’ve grown up around, family reunions and everything so my family you know, we’re not anti-police."

The death of Garner's father,  and subsequent refusal of a Staten Island grand jury to indict New York City police officer Daniel Pantaleo for using a chokehold on the father of six, has set off protests against police brutality across the country.

Ismaaiyl Brinsley, the 28 year-old man who shot and killed officers Wenjian Liu and Rafael Ramos as they sat in their police cruiser in Brooklyn, has Instagramed the message "I’m Putting Wings On Pigs Today. They Take 1 Of Ours…Let’s Take 2 of Theirs,#ShootThePolice, #RIPErivGarner and #RIPMike Brown" prior to the shooting.

Addressing the shooter, who had a history of run-ins with the police and was reportedly suicidal, Garner said, "It didn’t have anything to do with race or anything--it was a mental health crisis and he was dealing with [it] personally and didn’t have the proper way to express his anger."

The Garner family is suing eight NYC officers, the city of New York and the New York police department for $75 million, citing “negligence, recklessness and carelessness.”

Watch video below from ABC: