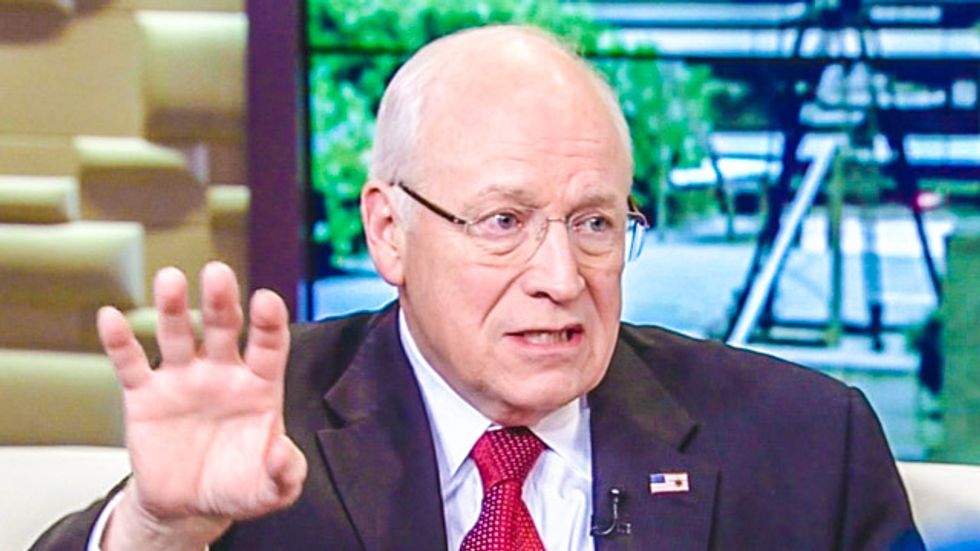 Former Vice President Dick Cheney (R) did a short press junket earlier this month to defend his administration's actions regarding the CIA's "Enhanced Interrogation" programs, which a Senate report characterized as torture.

Cheney dismissed the committee's report as "awful" and "full of crap."

In his interview with Baier, Cheney claimed that U.S. detainees captured in the "War on Terror" are "not covered by the Geneva Convention."

"They were unlawful combatants," said Cheney. "And under those circumstances, they were not entitled to the normal kinds of courtesies and treatment."

PolitiFact, the nonpartisan fact-checking agency based at the Tampa Bay Tribune, said that allegation is Mostly False.

Even under these low-level protections, PolitiFact noted, certain actions are "prohibited at any time and in any place whatsoever" to military and government personnel. These include "violence to life and person, in particular murder of all kinds, mutilation, cruel treatment and torture," in addition to "outrages upon personal dignity, in particular humiliating and degrading treatment."

Another contention of Cheney's, that deceased Iraqi President Saddam Hussein enjoyed a more than ten-year relationship with the terror group al-Qaeda, PolitiFact's sister group PunditFact also rated as False, giving it a rating just shy of the site's "Pants-on-Fire," status, reserved for the most brazen and outrageous of lies.

"Cheney said Hussein had a 10-year relationship with al-Qaida. Two comprehensive, high-level government reports largely refute that statement. That includes one Pentagon study that relied on a trove of secret Iraqi government documents that fell into American hands after the invasion," wrote PunditFact's Jon Greenberg.

In Cheney's Sunday Meet the Press interview, Chuck Todd asked the former Vice President why the U.S. prosecuted Japanese soldiers for waterboarding U.S. soldiers during World War II if waterboarding is not a crime.

Cheney countered that those Japanese officers were punished for other, much worse crimes than waterboarding, a claim that the Washington Post's Glenn Kessler awarded three out of four "Pinocchios," the newspaper's rating scale for lies told by public figures.

"At the International Military Tribunal for the Far East (IMTFE), which lasted from April 29, 1946 to Nov. 12, 1948, there were indeed Japanese war criminals who were tried and ultimately executed for some of the events mentioned by Cheney," Kessler wrote.

Kessler cited “Drop by Drop: Forgetting the History of Water Torture in U.S. Courts,” a 2007 article in the Columbia Journal of Transnational Law, by Judge Evan Wallach that described a Japanese torture technique called the "water treatment," in which "the victim was bound or otherwise secured in a prone position; and water was forced through his mouth and nostrils into his lungs and stomach until he lost consciousness.”

A number of Japanese officers were found guilty and prosecuted for war crimes as a result of their use of the "water treatment" on U.S. soldiers. Furthermore, Kessler noted, a U.S. soldier was court-martialed during the Vietnam war for waterboarding a North Vietnamese detainee.

"Cheney dismissed too cavalierly Todd’s question about the prosecution of Japanese soldiers for waterboarding," said Kessler. "(S)uch techniques in different circumstances have been the subject of U.S. military prosecutions in the past. Thus the former vice president earns Three Pinocchios."