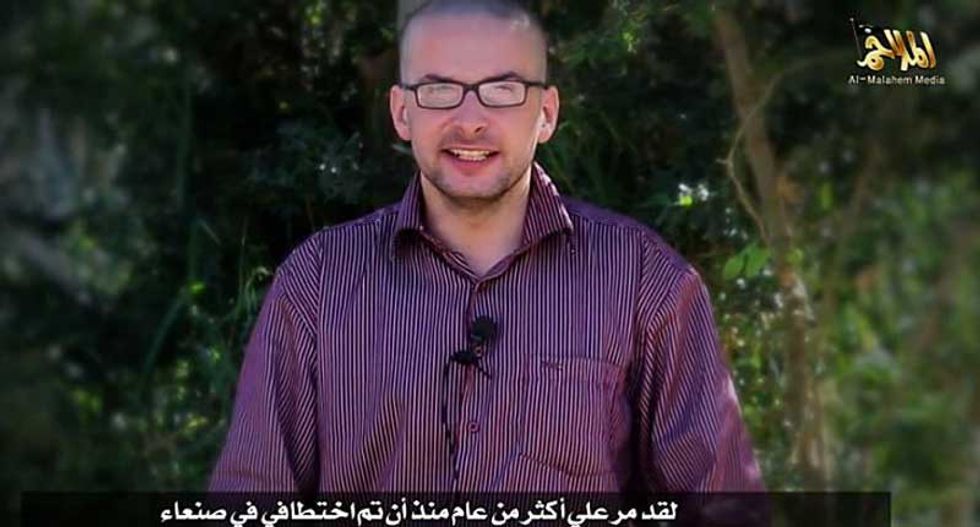 A grab taken from a propaganda video released by al-Malahem Media on December 4, 2014 purportedly shows US hostage Luke Somers, 33, kidnapped more than a year ago in the Yemeni capital Sanaa, saying that his life is in danger (AFP)

The British relatives of the US hostage killed by Al-Qaeda during a rescue attempt in Yemen criticised the raid Monday, saying they would have preferred negotiations.

The operation on Saturday came two days after 33-year-old Luke Somers' kidnappers had issued a video in which they threatened to kill him within 72 hours.

A South African captive, 57-year-old teacher Pierre Korkie, was also killed, just a day before he was due to be released under a negotiated deal.

"I think the family would have like to have seen more attempts to solve the problem before it came to a crisis," the British-born photojournalist's stepmother Penny Bearman told BBC radio.

Bearman also told The Times newspaper: "We are sure that Luke would have given support to the ongoing discussions (to secure his release) in Yemen rather than the conflict approach. There had been threats before that had not been carried out."

Somers' father Michael was "quite angry... because if there had not been a rescue attempt he would still be alive," she was quoted as saying.

But she added in her BBC interview: "We don't blame the American government for attempting to rescue him."

"If they'd been able to pull him out we would have been singing their praises," she said.

Somers was kidnapped in September 2013 and so it was "quite surprising" that US President Barack Obama sanctioned the attempted rescue 15 months on.

She said his relatives were not given "any warning at all" about the raid.

"We had no idea, it was a complete shock," she said.

Half-sister Lucy Somers, 25, said the photojournalist hoped his pictures would help resolve the political and military chaos in the Arabian Peninsula state.

"The tragedy of his death, and injustice of how he was used, must be undone by the warmth, strength and humanity of his images," she told The Times.