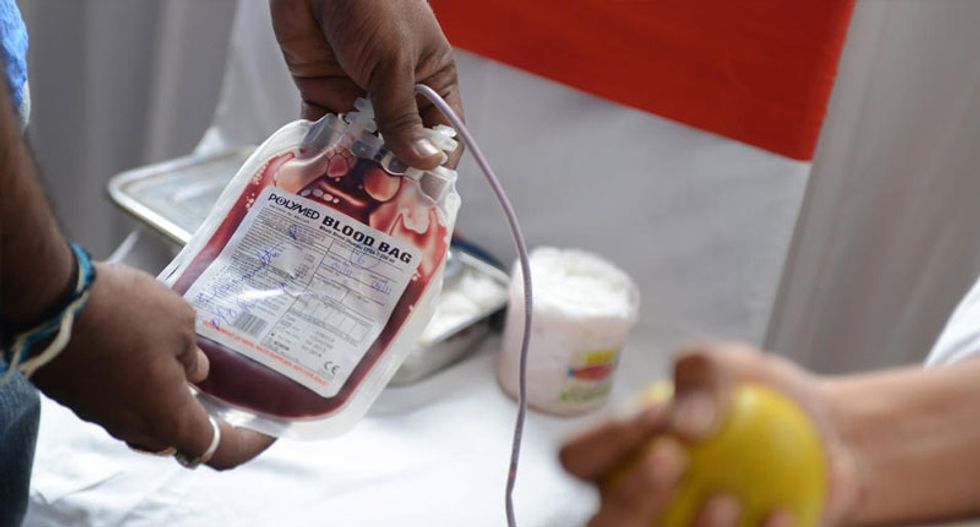 A medical volunteer (L) checks a blood bag after a rally on the observation of National Voluntary Blood Donation Day in Hyderabad on October 1, 2013 (AFP Photo/Noah Seelam)

The US Food and Drug Administration said Tuesday it will move to ease a lifetime ban on blood donations from homosexual men, allowing them to give after a year of abstaining from sexual activity.

The FDA said it made the decision after reviewing scientific evidence in recent years regarding its blood donor policy for homosexual males.

"The agency will take the necessary steps to recommend a change to the blood donor deferral period for men who have sex with men from indefinite deferral to one year since the last sexual contact," said a statement from FDA Director Margaret Hamburg.

The agency said it will recommend the policy change in 2015 and that it will be subject to public feedback before it is finalized.

A growing number of medical and legal experts have argued that the existing restrictions are outdated, and that sophisticated tests for human immunodeficiency virus (HIV) exist that can make blood donation by gay men a much safer practice.

Opponents of the ban say it stigmatizes homosexuals and dates to a time when the AIDS epidemic was spreading quickly in the gay community, sparking widespread fear about the deadly infection, which was then poorly understood.

Earlier this month, a panel of experts convened by US health regulators failed to recommend whether a lifetime ban should be lifted on gay men donating blood, following two days of heated deliberations.