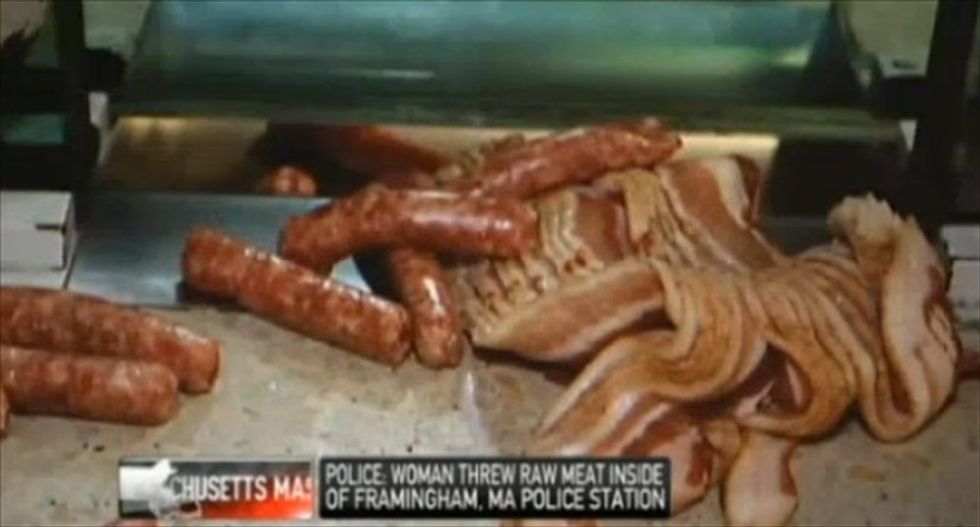 Lindsey McNamara was charged with disorderly conduct and malicious destruction of property for allegedly approaching a dispatcher for the Framingham Police Department with the meat hidden inside a Dunkin' Donuts box, saying she was there to "feed the pigs." She also threw some of the meat on the dispatcher's counter.

McNamara's arraignment was delayed until Feb. 9 after a judge ordered her to be put under psychiatric evaulation.

WBZ-TV reported that McNamara told the court she intended to represent herself.

"God told me to come over there and feed the pigs, and you guys are allowing people to sell me," she said.

Police Lt. Harry Wareham told Boston.com that McNamara said something similar when she approached the station with a "great smile on her face."

"There's a lot of unrest regarding law enforcement, and I don't know if [the incident] is related or not," Wareham said. "There's probably a lot more productive ways to voice her displeasure with police."

McNamara's parents, who attended Friday's hearing, said the suspect is "going through a difficult time right now." Her father said she was attending Salem State University and working at a nursing home before the incident. But the university was unable to confirm that McNamara studied there.

Watch NECN's report on the incident, as aired on Friday, below.