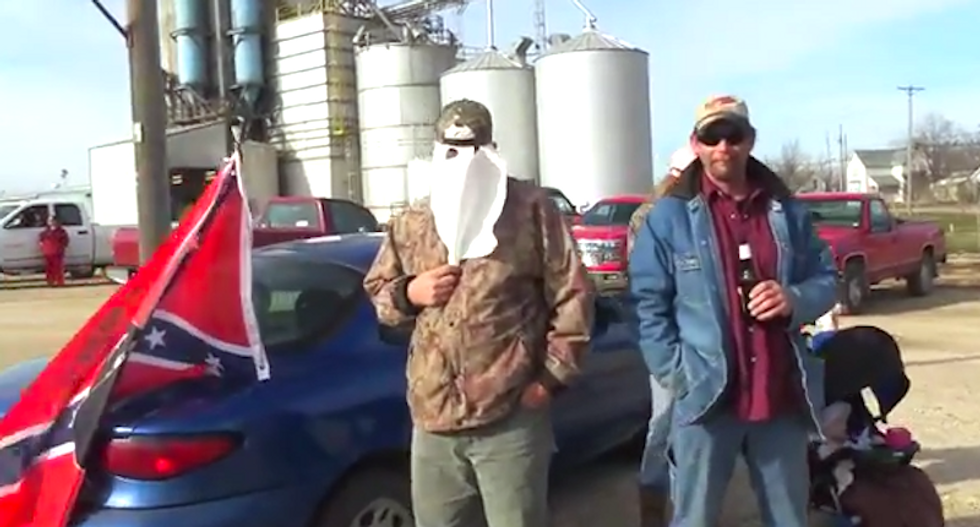 A group of Ferguson protesters were met Thursday afternoon with Confederate flags, racist symbols, and gunfire as they marched through a pair of rural Missouri towns.

Residents of Gerald and Rosebud, where the marchers arrived about noon, set up a display of fried chicken, a melon, and a 40-ounce beer bottle in the street.

Some of the counter-protesters wore improvised Ku Klux Klan hoods, and they set up homemade signs supporting law enforcement and the grand jury's decision not to charge Darren Wilson in the shooting death of 18-year-old Michael Brown.

“We’ve seen a few people who have used the N-word, who have asserted their First Amendment rights with obscenities, and that’s a part of our country and your rights under the Constitution,” said NAACP president and CEP Cornell William Brooks, who added that demonstrators have more frequently been met with support, including prayer and refreshments. 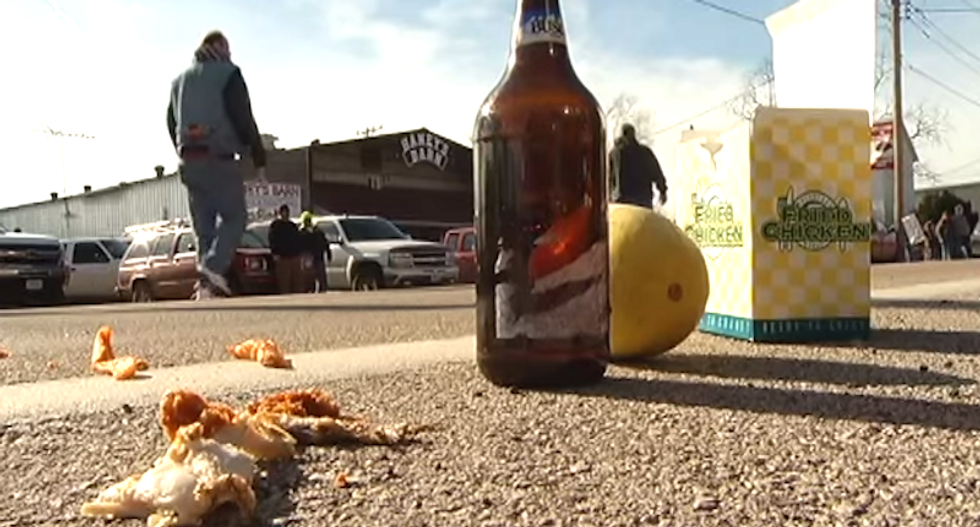 Fried chicken, beer, and melon set out in roadway in Rosebud, Missouri (KRCG/YouTube)[/caption]

Police are investigating a gunshot fired at the back of one of the buses traveling with the marchers, who have been walking 20 miles a day since Saturday to protest the grand jury decision.

“I support the police,” said former Rosebud mayor Clyde Zelch, who stood before a sign reading “Grand jury got it right! Justice was served.”

“We may have a system that needs to be improved on, but it’s a system our Founding Fathers gave us, and what the NAACP acts like is that we’re supposed to throw out everything that’s worked for 200 years, and the only version that they want is one in which they win every time,” Zelch said. “It should not be us against them. This is just simply criminal committing crimes and having to pay a price for that.”

He said about 175 counter-protesters had joined him, but news reports placed that number closer to 50.

Doug McQuery, who wore a T-shirt supporting the former Ferguson police officer, told the Missourian he thought it was fine if protesters wanted to burn down their own towns.

But the Bland resident said he wouldn’t stand for that anywhere else, and he expressed doubts that the Journey for Justice organized by the NAACP would be peaceful.

One of the marchers, Rhea Willis, said the hostile response reminded her of the attitudes her parents faced as civil rights activists in the 1960s.

"The comments that we saw are pure ignorance," Willis said, adding that racism is learned, not innate.

Her 15-year-old daughter, Cheyenne, took off school to participate in the march, and she plans to write about her experience for her high school newspaper.

"I've been brought up to know how to deal with people like that," Cheyenne Willis said. "I ignore them and keep moving forward."

The activists plan to walk another 20 miles Friday, when they expect to reach the Governor’s Mansion in Jefferson City.