Ferguson protesters lawyer up after scores of arrests 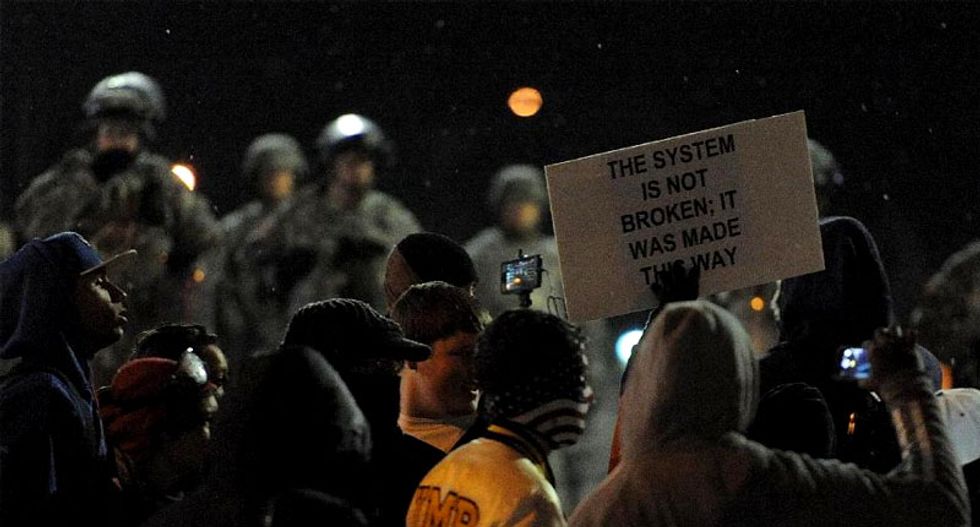 A demonstrator holds a sign during a protest outside the Police Department on November 26, 2014 in Ferguson, Missouri (AFP Photo/Michael B. Thomas)

The young man and woman waiting in the dark outside the St. Louis county jail were bundled up in scarves and hats to ward off a light freezing rain, but still they were shivering. Every time someone emerged from the jail they would scurry with the person to a nearby car, which had the engine running and the heat blasting.

The pair were one of several teams working in shifts to help some of the more than 100 people who were arrested during last week's sometimes violent protests in Ferguson, Missouri. Their job was to help the newly released individuals get legal aid for upcoming court appearances.

Each person received a flyer with numbers to call for lawyers and legal advice. They were also offered a ride home.

The volunteers, who will return to the jail again on Monday after the holiday weekend, are part of a centralized team of lawyers and law school students pitching in from around the United States.

They are tapping into a sophisticated network of legal experts established over the past decade in the wake of high-profile mass demonstrations, including protests at the Republican National Convention in 2004 and the Occupy Wall Street protests in 2011. The network includes seasoned lawyers who routinely handle cases stemming from protests and civil disobedience, and who say they have learned from each protest.

"Occupy Wall Street is the gift that keeps on giving," said Wylie Stecklow, a New York-based lawyer. Stecklow's firm, Wylie Law, represented 200 people who were arrested during the Occupy protests in New York.

He learned valuable lessons from the Occupy and RNC protests. For example, how best to centrally fund bail payouts and how to work together to represent large numbers of people.

Some of the volunteers deployed in Ferguson have acted as legal observers, who are tasked with documenting each arrest that is made at a protest and serving afterward as a witness to the events leading to charges.

But the job of the legal team working in Ferguson goes far beyond the duties of protest observers. Once people have been arrested and charged, lawyers from the same central network offer their services to each individual with a court case.

Since August, roughly 300 people, including local residents and activists as well as organizers and journalists who traveled to Ferguson, have been arrested amid the protests, which have been marred by looting and arson attacks.

Many who were charged in the tumult that followed the police shooting of an unarmed black teenager in August are set to appear in court in January, while others arrested last week and unable to post bail are still in jail.

Volunteers are manning a local legal aid hotline for protesters who have been arrested and their families, and various local and national non-profit groups have formed a central defense team to handle the cases.

"There's a huge apparatus of invisible people working on this," said Purvi Shah, director of the Bertha Justice Institute at the Center for Constitutional Rights in New York.

She is one of around a dozen lawyers who have made regular trips to Ferguson from around the country since August. She estimated there were more than 100 lawyers offering help from afar and 10 or 15 people working in shifts on the ground. That number does not include the law students and recent law school graduates volunteering in Ferguson.

"Having a mass defense coordinating efforts is the best way to do things because you've got lawyers and paralegals sharing information," said Martin Stolar, a New York lawyer who represented people arrested during the Occupy Wall Street protests.

"You can also tell the prosecutors, 'You should dismiss all of these cases unless you can go through and prove every individual one is valid.'"