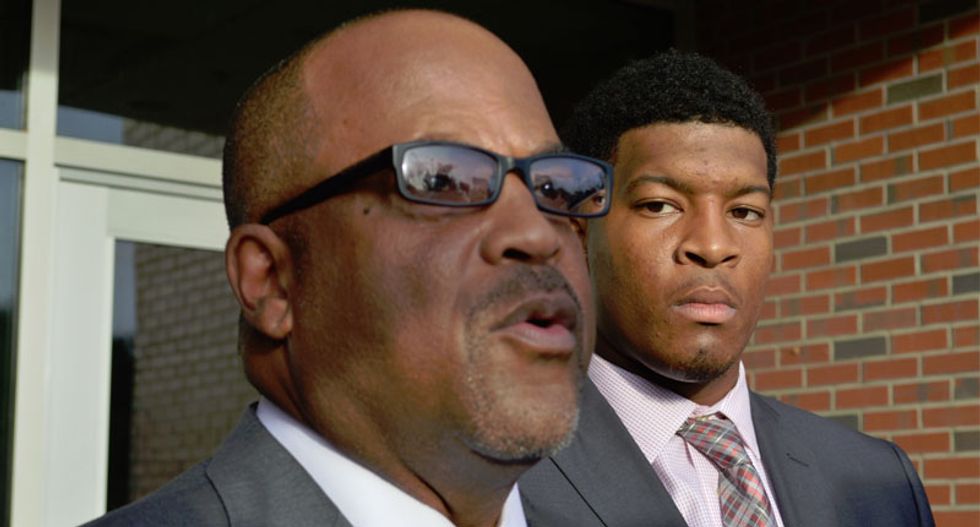 Florida State University star quarterback Jameis Winston told a student conduct hearing that a woman who accused him of raping her two years ago was "lying" about their encounter, according to media reports on Wednesday.

The 20-year-old sophomore, the top U.S. college football player last year after winning the Heisman Trophy, gave his version in a statement to a former Florida Supreme Court justice retained by the university to hear testimony.

According to a copy obtained by several media outlets, Winston described the sexual counter as consensual, providing a graphic account of having sex with the woman in his apartment after they met at a bar near the campus.

"I never used physical violence, threats, or other coercive means," Winston said in the statement, adding that his unnamed accuser "is lying about me."

Winston also said he intended to exercise his right under the student conduct code not to answer questions until his accuser could be confronted by lawyers, under penalty of perjury, the media outlets reported.

"Rape is a vicious crime. The only thing as vicious as rape is falsely accusing someone of rape," Winston said in the statement.

Reuters could not immediately reach his attorney, David Cornwell, who told reporters after the closed door hearing that the woman was using it to build a civil lawsuit against Winston.

A decision is expected in two to three weeks. Punishments could range from a reprimand to expulsion if Winston is found in violation of four conduct code charges, two of sexual misconduct and two of endangerment.

Winston was not criminally charged over the December 2012 incident. A Florida state attorney last year found insufficient evidence for charges.

The female accuser, who no longer attends FSU, has filed a complaint with the U.S. Department of Education Office for Civil Rights, which is investigating the university under Title IX, which requires colleges receiving federal funds to promptly investigate complaints of sexual abuse.

After the hearing, her attorney declined to discuss a possible lawsuit against Winston, saying she was focused on holding him accountable.

The woman testified in a separate room from Winston, attorney John Clune said.

He criticized Winston's attorney for repeatedly publicizing the woman's name, which was redacted in copies of the statement published by the media.

"That kind of retaliation is frustrating to see," Clune told reporters, speaking before Winston's statement was made public. "It doesn't really help Mr. Winston at all."