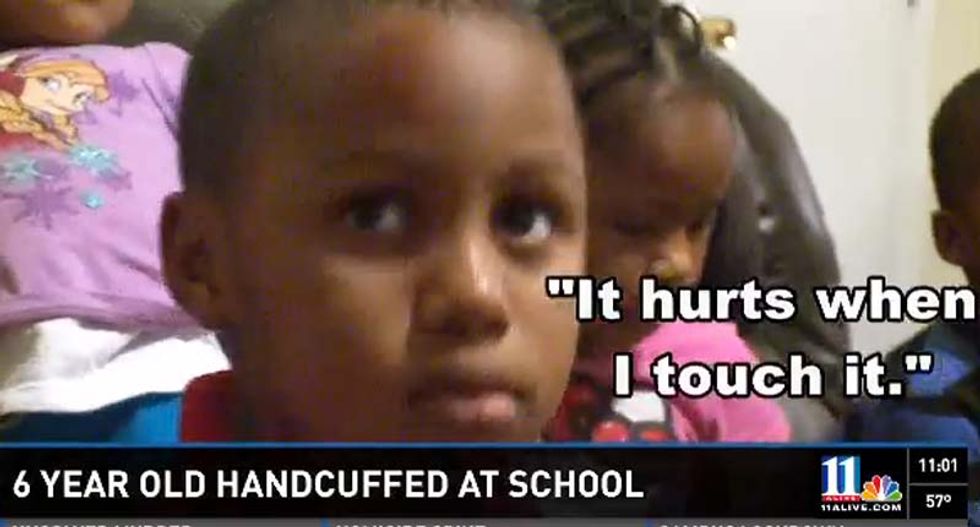 An elementary school in Stone Mountain, Georgia is under fire after a mother accused school administrators of using metal handcuffs on her 6-year-old son, a special needs student at the school.

Lakaisha Reid said she and her husband received a phone call from a school administrator at Pine Ridge Elementary, informing them they needed to come to the school because of, a problem with their son, according to WXIA.

When they arrived, Reid claims they could hear their son, Patrick, screaming in a back office.

“We go into the school, a gentleman takes us back, I hear my son yelling. He’s screaming,” Reid said.

Reid said she and her husband found their son handcuffed in the room, with his wrists bruised, as a school administrator explained that the young boy, who is African-American, had been misbehaving and had to be restrained.

Reid, explaining that her son Patrick is a special needs student, claims there are better ways to restrain a 6-year-old.

“He just ran away from school. It does not require handcuffs for this. He’s a special-needs kid,” she said.

The DeKalb County School District issued this statement regarding the decision to handcuff the child, saying the boy did attempt to run away from school and was placed in a room with three school officials while administrators attempted to contact his parents. They statement went on to say that the cuffs were needed to keep the boy from hurting himself and others.

"For approximately one hour, the student was scratching, kicking and hitting school personnel and continued to exhibit violent behavior, running into walls, banging his head on tables and placing his health at risk. At this point, the SRO (School Resource Officer) placed handcuffs on the student to protect him from harming himself. When the parents arrived, they were told the student was handcuffed for his personal safety," the statement read.

Reid, who said she is trained in how to handle disruptive special needs children, disagreed with their decision and is asking the school to review their policies.

"They need to have police officers that are trained for special needs kids or for any kids that are that age. That's pretty young for handcuffs. Anything can happen with those handcuffs on him," she said.

Asked if there was a situation where the handcuffs would be appropriate, she replied, "Yeah, if he was robbing a bank."

Watch video below from WXIA: