‘Get a lovely bust for Christmas’: Tips from the 1930s on how to be a perfect festive woman 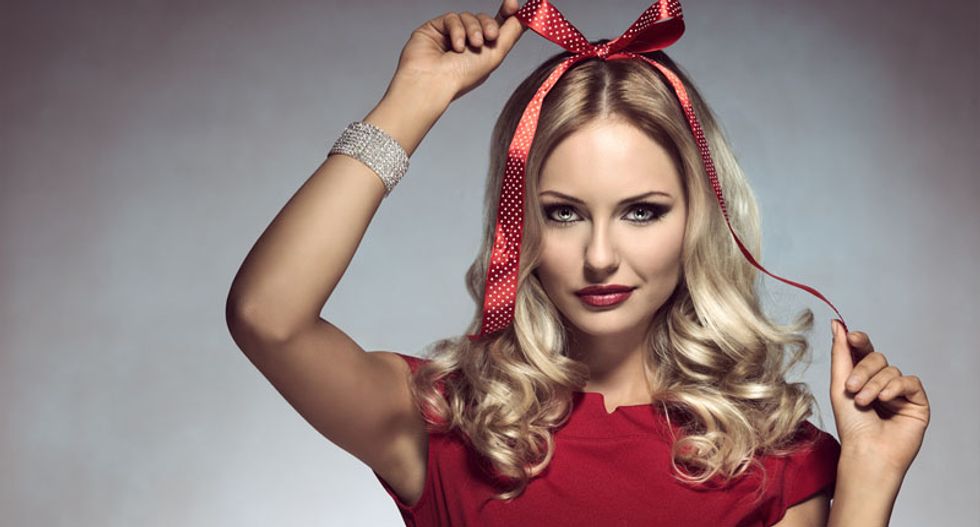 When my good friend and long-term collaborator Sam Warren was given a pile of women’s magazines from the 1930s by her grandmother Jane Frampton, we found among them 11 Christmas issues of Good Needlework, Model Housekeeping, The Needlewoman and Stitchcraft.

We’re both preoccupied with popular culture but we’re also avid consumers of all sorts of total nonsense. And so the idea of comparing these issues to more contemporary versions emerged.

Because none of these magazines remains in print, we decided to buy up-to-date equivalents – namely the Christmas editions of Good Housekeeping, Red, Woman & Home and Prima.

Then, sat on the floor of my living room, we conducted a close reading of all 15 magazines, looking for any and all references to Christmas. We took pages of handwritten notes, drank a lot of coffee, smoked a lot of cigarettes, laughed a great deal and sometimes found ourselves downright dumbstruck.

One particular favourite from the 1930s magazines was an advert in Good Needlework from 1937 claiming that readers can achieve a “Lovely Bust for Xmas” with the Beautipon amazing vegetable flesh former. If only such non-invasive technology, we cried, was available for the less-than-well-endowed woman of today (ourselves included).

It’s well known that the division of household labour by gender persists today. Despite all kinds of progress, women still carry a disproportionate amount of responsibility for this work.

Not bought from Aldi.

This applies even more over Christmas, where the majority of tasks are still considered women’s work. That includes buying, wrapping and dispatching cards and presents and decorating the house before the big day. When December 25 arrives, it means making and serving festive meals, keeping everyone happy (however young or old) during the festivities and clearing up the mess afterwards.

We found that these magazines provide very clear constructions of what Christmas ought to be and how it should be organised.

The gift of giving

Such a lot has changed for women since the 1930s that we expected to see significant differences between our two sets of magazines in terms of the depiction of women’s role in the organising of Christmas.

There is one element of the perfect Christmas recipe that hardly seems to have changed since the 30s though. That’s the puzzle of gift buying. Across all 15 magazines, the message is clear – Christmas presents must delight the recipient and be affordable at the same time. Women, it seems, continue to be socialised to see gift giving as an important, part of their gender role and to attend to it very carefully.

One key difference is that the gift puzzle presented in modern magazines is more difficult than it used to be. Apparently there are many more ways to get gift giving wrong these days and to fail at being a woman. Now women need to take account of their kith and kin’s interests when choosing a gift. Are they a fashionista, a technophile or an outdoorsy type, for example?

Back in the 30s, gift options were more of the order of perfume or household appliances like irons for women; and chocolates, dolls and prams for girls.

This serves as a reminder that the extensive consumer choice on offer in late modern capitalism can in fact be much more stressful than it is liberating.

Rather more of a merciful relief is the liberation from the kind of Christmas-from-scratch ideal that was pushed on readers in the 30s. Everything was supposed to be handmade, including presents such as a hot-water bottle cover, an egg cosy or a stamp-book case.

While you wait for Heston to be born…

This all might seem like quite a challenge, but these magazines suggest that a competent woman should be able to achieve the perfect Christmas for her loved ones, all she needs is a healthy dose of forward planning. As Ann Capell writes in the 1934 Christmas issue of Model Housekeeping:

I think it is a little bit our own fault if we don’t enjoy ourselves as much as we expect, for very often we put everything off to the last minute, and on the great day prepare our toilet in a violent hurry and tear off all hot and bothered.

The modern magazines, on the other hand, at least acknowledge just how strenuous – not to say impossible – it is to make Christmas work. Now, labour-saving options, such as buying and then icing shop-bought Christmas cakes or for “fast festive make-up” which can be done in the back of a taxi, are presented as essential for minimising women’s stress levels.

In fact, the modern magazines were more open to discussing the pressure associated with not being able to live up to lofty ideals at Christmas.

But that’s not to say the Christmas burden has been entirely lightened. For example, women are encouraged to spend, spend, spend on food, gifts, party clothes and decorations, but also not to succumb to a mad retail frenzy whilst simultaneously purchasing wisely in terms of cost.

Indeed Christmas in our 1930s magazines may have come with pressures about making everything yourself – and indeed to have the right bust and not rush your “toilet” – but it was an altogether more unified, sentimental and happy affair. The mixed messages sent out by modern magazines has brought in something more complex and potentially even more challenging.

The expectations for women when it comes to festive labour have persisted across the years and, perhaps surprisingly, seem to have grown more pressing. As I engage in my own Christmas preparations, I wonder if my various Christmas disasters over the years (including last year’s attempt to amputate my index finger when making bread sauce) are therefore simply to be expected.

By Jo Brewis, University of Leicester