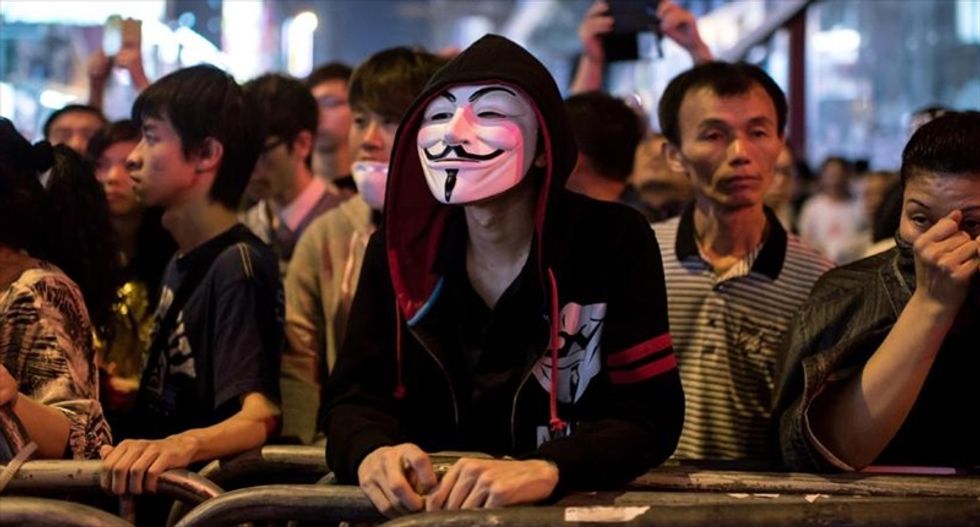 A pro-democracy protester wearing a Guy Fawkes mask stands at a barricade during a stand-off with police in Hong Kong's Mong Kok district on Oct. 19, 2014. Photo by Alex Ogle for Agence France-Presse.

The three original founders of Hong Kong's pro-democracy Occupy movement tearfully announced on Tuesday they would "surrender" by turning themselves in to police and urged protesters still on the streets to retreat.

The announcement came after hundreds of pro-democracy protesters clashed with police late Sunday, leaving dozens injured in one of the worst nights of violence since rallies began over two months ago.

"As we prepare to surrender, we three urge the students to retreat ?- to put down deep roots in the community and transform the movement," said Occupy Central leader Benny Tai.

Tai said the trio would surrender to police on Wednesday in a commitment to the rule of law and "the principle of peace and love."

"Surrendering is not an act of cowardice, it is the courage to act on a promise. To surrender is not to fail, it is a silent denunciation of a heartless government," Tai said.

He praised the bravery of frontline occupiers and criticised the police as "out of control", saying it was time for protesters to leave "this dangerous place."

Academics Tai and Chan Kin-man, and Baptist minister Chu Yiu-ming founded the Occupy Central civil disobedience group in early 2013 to push for political reforms, but have increasingly taken a backseat as more radical student groups came to the fore.

It was not immediately clear how they would respond to Tai's appeal.

Teenage poster-child of the movement Joshua Wong and two other student leaders went on hunger strike late Monday in a last-ditch attempt to force the government's hand.

"Our young people have used their bodies to withstand the blows of police batons, their blood and broken bones have brought us the deepest sorrow," Tai said.

"We respect the students' and citizens' determination to fight for democracy, and we are furious at the government's heartless indifference."

While there is no specific warrant out for the founders' arrest, Hong Kong and Chinese authorities have consistently slammed the protests as illegal.

Tai said he did not know how police would respond to their surrender, but the three were prepared for any consequences.

He said the Occupy movement would now take a different direction to promote the civil disobedience movement, including through education and a new social charter.

China's communist authorities insist that candidates for the 2017 vote must be vetted by a loyalist committee, which the protesters say will ensure the election of a pro-Beijing stooge.

"We are hoping that after the hunger strike we have a chance to speak with government officials openly -- then there will be a chance to solve this Hong Kong problem," 18-year-old Wong told reporters.

The city's embattled leader Leung Chun-ying -- whose resignation is demanded by protesters -- urged the students Tuesday to look after themselves.

"I hope the students that are participating in the hunger strike can take care of their health, especially when the weather is getting colder," he told reporters.

Talks between demonstrators and the Hong Kong government in October ended in an impasse, with protest leaders saying authorities had little to offer.

Three student leaders were denied permission to board a flight to Beijing last month where they hoped to bring their demands for free elections to Chinese authorities.

A court has approved an injunction to clear part of the Admiralty site, but an appeal against it was being heard Tuesday.

"At this point, we won't decide on whether to retreat or not," Wong said Tuesday.

Leung warned Monday that the "intolerable" protests will come to nothing and hinted that further police action may take place.

The protests have also sparked a diplomatic row between London and Beijing.

China on Monday defended its refusal to allow a group of British MPs into Hong Kong, describing their planned trip to the former colony as "overtly confrontational".