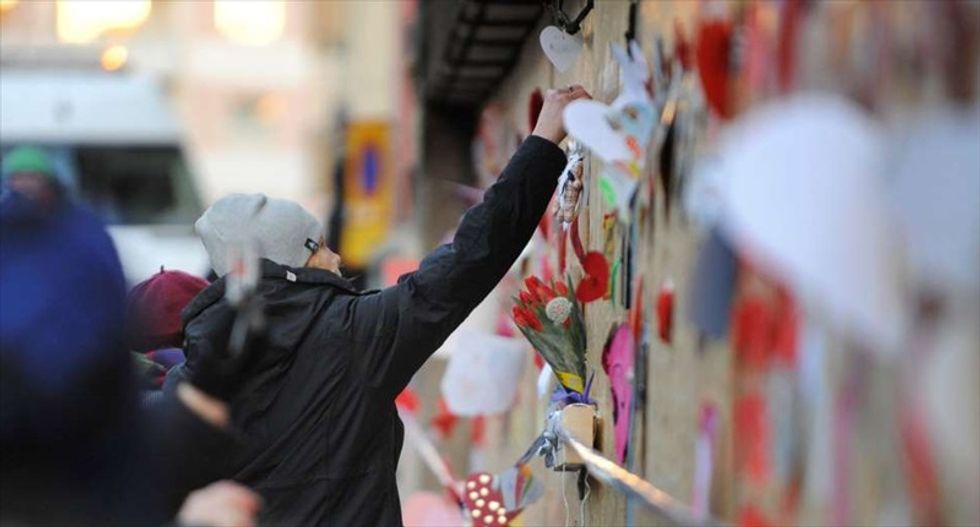 People leave flowers and messages of good will at the scene of a destroyed mosque the day after an arson attack on Dec. 26, 2014 in in Eskilstuna, Sweden. [AFP]

Several hundred marchers turned out in Sweden on Friday to denounce an arson attack on a mosque that injured five people Thursday, as the traditionally tolerant country confronts the rising influence of the extreme right.

A firebomb was thrown through a closed window of the mosque in the central city of Eskilstuna on Thursday, injuring five of the nearly 70 worshippers inside -- two of whom remained hospitalised Friday.

Answering calls to denounce the attack by the "Together for Eskilstuna" Facebook page, a large group of people converged on the damaged mosque to show their support.

According to police, windows in a second Eskilstuna mosque were broken overnight Thursday, though authorities couldn't say whether the two attacks were linked.

"We will never tolerate this kind of crime. Those who want to practice their religion should have the right to do so," Lofven told public radio station SR.

No suspects had been arrested Friday afternoon in the case police have opened for aggravated criminal arson, which has been joined by Sweden's intelligence service, Sapo.

"This is a serious crime, but for the moment, nothing is pointing us in one direction more than others," said Sapo spokesman Sirpa Franzen.

The arson struck another blow to Sweden's self-perception as a generally warm and welcoming host to foreigners.

In September elections, the extreme right, anti-immigration Sweden Democrats party became the third-largest party in the Swedish parliament by winning 12.9 percent of the vote.

Earlier this month, Sweden Democrats joined with conservative parties to reject the proposed budget of the country's leftist government, forcing it to call new elections in March 2015.

According to a recent mock election poll for radio station SR, Sweden Democrats has increased its September showing by a full point to 13.9 percent, with other surveys showing support of nearly 16 percent.

"There has been an intensification of hatred against foreigners," Omar Mustafa, chief of Sweden's Islamic Association, told public radio SR on Thursday.

In January, unknown perpetrators painted black swastikas on the door of a Stockholm mosque, after neo-Nazis attacked a peaceful anti-racist protest in a Stockholm suburb and seriously injured three people the previous month.