'I was tortured': Former maid tells Hong Kong court about mistreatment by employer 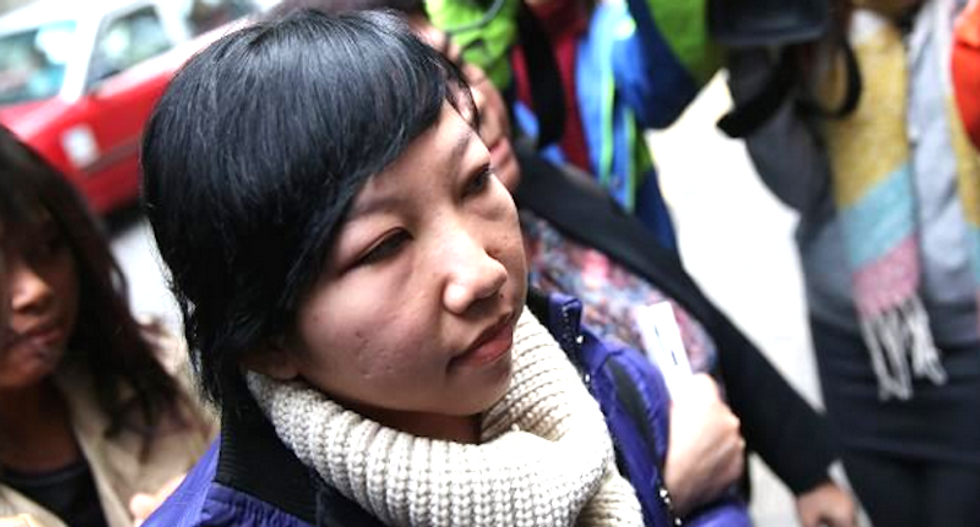 Erwiana Sulistyaningsih arrives at the Wanchai Law Courts to begin giving evidence against her former employer, who is accused of abuse and torture. (AFP)

An Indonesian former maid on Monday told a court for the first time how she was starved, beaten and ritually humiliated by her Hong Kong employers in a case that has sparked international outrage.

Erwiana Sulistyaningsih described in vivid detail how for months she lived on nothing but bread and rice, slept only four hours a day and was beaten so badly by her former employer Law Wan-tung that she was knocked unconscious.

"I was tortured," she told the packed courtroom through a translator on the opening day of the trial.

Opening the prosecution, solicitor Louisa Lai detailed the harrowing litany of abuse the former maid allegedly suffered including how she was told to wrap her sore-covered feet in plastic bags "because of the smell."

Law denies all charges of abuse.

Sulistyaningsih's case has shone a spotlight on the plight of migrant domestic helpers in Asia and the Middle East after reports of torture and even killings.

In March, a Malaysian couple was sentenced to hang for starving their Indonesian maid to death, while in the same week a Singaporean couple pleaded guilty to abuse after their helper lost 20 kilos in seven months.

Such cases have prompted a clampdown on domestic worker visas in some countries -- Myanmar suspended a seven-month-old scheme in September and Indonesia has pledged to stop sending domestic workers abroad from 2017.

Pictures of Sulistyaningsih, who was admitted to a hospital in Indonesia in January emaciated and in a critical condition, sparked widespread anger in her home country and even drew comment from the president.

But on Monday the 23-year-old remained calm as she described in graphic detail her alleged abuse, including one incident where she was stripped naked, sprayed with water and made to stand in front of a fan in the middle of winter.

Law faces 21 charges -- also pertaining to two other former domestic helpers -- including grievous bodily harm with intent, criminal intimidation and failure to pay wages. The most serious carry a maximum sentence of life in prison.

Prosecutors also allege Law used household items such as a mop and vacuum cleaner as "weapons" against her employee, whom she turned into a virtual prisoner.

The 44-year-old mother-of-two was arrested in January as she tried to board a flight to Thailand but was released on bail pending the trial.

Dressed in a light brown coat and thick-rimmed glasses, Law kept her head down as her former maid described the "torture" she allegedly suffered, only occasionally shooting her a glance.

Earlier in the day she pleaded not guilty to all but one of the charges against her, admitting only that she had failed to arrange insurance for Sulistyaningsih.

On Monday, around 20 members of an organisation representing Hong Kong domestic workers staged a protest outside the court, waving signs declaring "no to modern day slavery".

"Justice for Erwiana" and "we are workers, we are not slaves," they shouted.

Inside, Sulistyaningsih described how, after she was caught trying to run away, her employers took away her passport and wallet and locked her in the house at all times.

It was only when she was too weak to walk that Law agreed to release her, covering her in makeup to hide her injuries for the trip to the airport and strapping a nappy on her as she could not use the toilet.

"She threatened to kill my parents back home if I talk about the torture to anyone," she said.

Hong Kong is home to nearly 300,000 maids, mainly from Indonesia and the Philippines.

Thousands took to the streets in May calling for better working conditions and greater legal protection for domestic helpers and the case remains a rallying point for many.