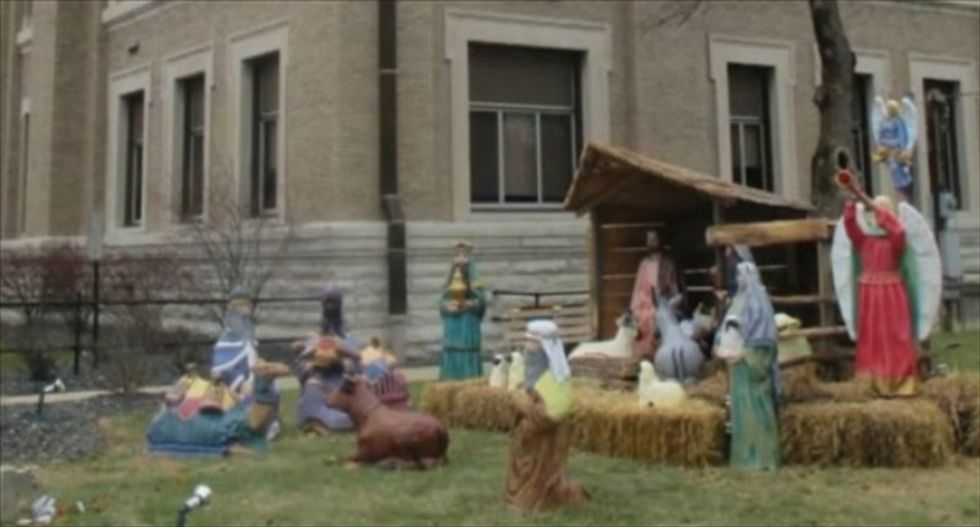 An Indiana Republican lawmaker is planning to introduce a bill he said would allow government agencies to display Nativity scenes and protect them from litigation by atheists and civil rights groups, WXIN-TV reported.

"We are as a nation allowing this to continue," state Sen. Jim Smith (R) said. "We are certainly stealing Christmas from our children and from our culture."

The "Merry Christmas Bill," as it is called, is modeled after a Texas law passed last year. The proposal would allow local officials, as well as public schools, to put up Christmas displays or hold Christmas events as long as they include other faiths. An earlier version of Smith's bill was approved unanimously in the state Senate during the last session, but was not voted on in the state House.

Smith told the Indianapolis Star that the bill was necessary because of disputes like the one involving a Nativity display in front of the Franklin County courthouse.

The American Civil Liberties Union of Indiana (ACLU) and Freedom from Religion Foundation filed a suit contesting the legality of the display, but reached an agreement with county officials to maintain it through the Christmas holiday pending a court decision.

"The tactics are certainly threats and intimidation to silence people," Smith said of the lawsuit.

However, critics said that state agencies cannot be protected from lawsuits under the Establishment Clause of the 14th Amendment.

"It's rudimentary that the U.S. Constitution trumps anything they try to do," ACLU attorney Gavin Rose said. "A lot of people really do get into this war on Christmas thing. It's not a war on Christmas. It's an attempt to make sure government abides by what the constitution recognizes is governments role actually is."

Watch WXIN's report, as posted online on Monday, below.